Hall of Fame, US Rugby Foundation 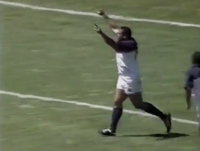 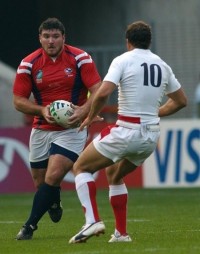 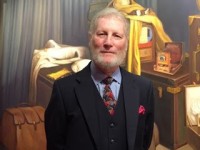 From co-founder and player coach of the San Mateo Rugby Club to the international pitch with both the United States and the Tongan National Teams, Saulala became universally known for his grit and unwavering values and integrity. Alatini was a center for Eagle 15s team from 1997 to 2000. He played in 20 games, earning 16 caps, and was a member of the Eagles' 1999 Rugby World Cup team. Alatini represented the Eagles at two Hong Kong 7s tournaments and earned 12 7s caps. And for the past nearly 30 years, he has coached for a variety of clubs across the Northern California Bay Area region. Alatini currently serves as the head varsity coach for Peninsula Green High School Rugby Club and remains very involved in the rugby community.

A University of California, Berkeley alum, MacDonald led the perennial powerhouse Bears to four National Championships from 2000-2004. He was named the 2004 National Championship MVP and was recognized as an All-American in all five years of his collegiate career. MacDonald played professionally for the Worcester Warriors and Leeds Carnegie in England. He represented the United States Eagles 15s in three Rugby World Cups in 2003, 2007, and 2011.

In the 2011 Rugby World Cup, MacDonald broke two US records: he recorded his 63rd cap,  becoming the most capped player in Eagle history and notched his 11th appearance in a Rugby World Cup match, breaking the previous record. Mike just completed his ninth season as forwards coach of Cal and remains heavily involved in the rugby community.

Phaidra Knight's raw talent and natural athleticism led her to skyrocket to an elite level of play early on in her rugby career. Knight cemented her presence as one of the premier players in the sport appearing for the USA Eagles 15s and 7s teams over the course of 18 years. Playing for the Eagles 15s in over 10 tours, she earned 35 caps and started in three Rugby World Cups in 2002, 2006 and 2010. Her level of play brought her many accolades, including being named to the World 15s Team in 2003, recognition as the USA Player of the Decade in 2010, and an induction into the World Rugby Hall of Fame in 2017.

From 2006 to 2009, Knight appeared on the pitch for the Eagles 7s, appearing in five tours and earning nine caps. In 2019, Phaidra founded PeaK Unleashed Foundation, a non-profit organization dedicated to the advancement of the personal and physical development of marginalized youth through rugby and yoga. She has served on USA Rugby's Board of Directors and in addition to serving on the Women's Sports Foundation Board of Trustees, she is their current President.

Kevin O'Brien is the winningest coach in USA Women's Rugby history, with an undefeated international record of 7-0, the best points scored versus points against margin (155-22) in U.S. Eagles history, and the only coach to bring home a Rugby World Cup trophy for the United States. O’Brien attended and played rugby for Saint Mary’s College in London, England from 1966 to 1970. Hearing of his talents, Beantown Women’s Rugby sent Kevin a one-way ticket to the United States to become their new head coach. Under his tenure at Beantown, he coached the program to three Women’s National Club Championship titles in 1982, 1983 and 1991. He took Middlebury College Men’s team to the Division II Collegiate finals in 2008 before winning the National title in 2009. At the club level, Kevin coached the Burlington Men’s Club to an appearance in the Division II Men’s National Final Four in 1995 and 1996. O'Brien remains active in the rugby community , serving as a World Rugby Educator and USA Rugby Coach Educator.

After moving to the United States in the late 1970s, Lewis played socially for Old Blue Rugby Football Club New York and later became heavily involved with the Chicago Lions. With the Lions he would find his stride and soon become a pillar in American rugby administration. He took those administration skills to USA Rugby where he served in many capacities, including as team manager for both the USA Men’s and Women’s National Teams in both 7s and 15s. His career in team management covered 14 years, 85 tests and A level matches, three Men’s 15s Rugby World Cups and two Rugby World Cup 7s for both the Eagle Men and Women. Lewis traveled the globe guiding the USA to numerous 7s tournament and up until 2015, every Eagle earning their 50th cap did so under Lewis’ management at some point in his career.

Wilbert “Salty” Thompson has coached numerous USA National Teams at the U19, U20, and High School All-American levels. His U19, U20, and High School All-American teams have produced over 40 Eagles 15s, 35 Eagles 7s, and 45 Collegiate All-American players. Salty's coaching career started and continues to today with Tempe Rugby. He coached Arizona State University, Atlantis 7s, and the Southern California representative 15s and 7s programs. Salty retired from a 25 year teaching career to become the Director of Eagle Impact Rugby Academy (EIRA) in 2013. Since EIRA’s creation, the program has produced many High School All-Americans, U20s, Collegiate All Americans, MLR and Eagles (both 7s and 15s). Through EIRA, Salty has led the charge in closing the gap in the global game of rugby and has influenced thousands of young ruggers nationwide.

After completing his playing career, Ed Todd picked up the whistle and became a top-level referee. He advanced through multiple levels serving as a  B-3 to A-2 referee around the United States and beyond. He served as an A Panel referee from 1996-1998 in the Northern California region. Some of his most notable matches include the Canada Cup in 1996 and head referee for Wales vs. USA South in 1997. He was a referee administrator for USA Rugby and the Northern California Rugby Football Referee Society for over 30 years. During his time as a referee administrator, he developed and educated thousands of referees. Ed's vision helped initiate USA Rugby's disciplinary procedures and he managed USA Rugby's disciplinary proceedings for a number of years. Ed published numerous videos, articles and papers, including The Referee Coaching Manual, which educated and set the standard for American referees.

Todd Clever attended the University of Nevada and played rugby for the Wolfpack from 2002 to 2004. He then went onto play professionally  in New Zealand, South Africa, Japan and the UK, while at the same time compiling a remarkable 15-year career with the US Men's National 15s team. Todd earned a record 76 international caps with the Eagles, including 53 of them as captain.

He appeared in three Rugby World Cups: 2003, 2007, and captained the 2011 team. His on-field performance would earn him recognition as the American Rugby Player of the Decade for 2000-2009 and selection to the Team of the Decade for 2010-2019. Todd also appeared on the pitch as prop for the Eagles 7s from 2004 to 2011. During his tenure with the Eagles 7s, he played in 26 tournaments and in the 2005 and 2009 Rugby World Cup Sevens. Todd recently established the Todd Clever Foundation, which will provide financial and supportive services to rugby players and teams across the globe.

Hall of Fame, US Rugby Foundation