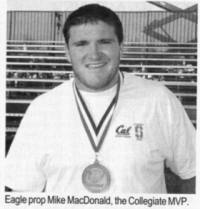 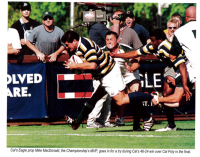 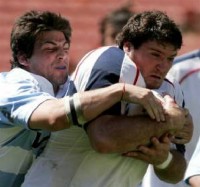 It's kind of astounding that Mike MacDonald was a capped Eagle prop at 20, and while that has happened since, it's still a massive accomplishment.

Mike MacDonald was a star player in high school for Lamorinda, and went on to be a part of a Cal team that was a perennial national champion, taking home the USA Rugby DI title in 2000, '01, '02, and '04. Only the storied upset by Air Force stopped that streak. During that time, he was an All American every year and was capped by the USA for the first time in 2000.

Young and still needing to learn the art of propping, Big Mac had to learn while playing at the highest level. And that he did, playing in three World Cups and evolving sufficiently to become a hugely valuable professional. Playing in the Premiership in England, he was in one season named the Leeds Carnegie Player of the Year by both the supporters and the players.

Capable of playing in the open field, making big carries, and scoring tries, he was equally at home in the tight play and the scrums. He was named the player of the game in the Eagles' 2011 RWC win over Russia, and when he retired he was the most-capped USA player ever.

An easy-going guy off the field, Big Mac was a tireless servant to American rugby. He continues to be a part of it as a coach at Cal, but here we recognize the fact that he played prop at the highest level for 13 years and three World Cups, scored perhaps the ugliest try ever scored in a US test match (below), and was recognized as one of the best at what he did.