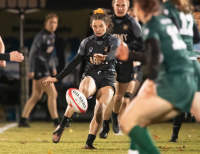 This coming weekend, at an event at the Washington Athletic Club in Seattle, West Point tighthead prop Larry Williams will officially be awarded the Rudy Scholz Award as the nation’s top men’s collegiate rugby player.

This is the latest in a series of pieces of good news for West Point Rugby, with the 2021-22 D1A National Championships surely at the top of the list. The D1A Championship came on the heels of Head Coach Matt Sherman being determined to prepare his team well for the spring playoffs. As the discussion continues about whether playing your regular conference season in the fall and your playoffs in the spring is too competitively onerous for the fall-centric programs, Sherman and Army Rugby conducted what almost looked like an experiment.

Get the team playing tough non-conference games that provide a strong buildup to the playoffs.

This resulted in a November clash with Lindenwood, and a March tour of the South where the Black Knights played (and beat) Queens University Charlotte and Life University. It could, said Sherman later, have all gone wrong had certain players (not least of which would be Williams) picked up injuries. But instead the commitment to the playoffs resulted in a championship.

All of that resonates in American collegiate rugby, but does it resonate at West Point? After millions of dollars in resources and support of varsity initiatives, including a women’s program that had made the NIRA final three times, did winning the D1A National Championship form a blip on the radar in the West Point Athletic Department.

Army Does it, Beats Saint Mary's to Win D1A

We asked West Point Athletic Director Mike Buddie (who won a World Series as a pitcher for the New York Yankees in 1998) to talk to us about it. Perhaps the most telling answer there was that he was quick to say “yes.”

“It resonates significantly; anytime you win a national championship that’s a big deal,” Buddie told Goff Rugby Report. “And to do it in a sport as rough and tough as rugby it says a lot about Matt Sherman and his staff, and it says a lot about the young men and women who attend West Point. It’s such a unique culture here at West Point because most of our coaches live in close proximity to each other. They rely on each other for guidance and suggestions whether it’s recruiting or building a culture or building a team. So our head Men’s Basketball and Football and Lacrosse oaches are so excited for Coach Sherman.”

The women’s team, Buddie pointed out, played 46 rugby games this academic year—11 games of 15-a-side and a staggering 35 games of 7s.

“At most schools you try to ask young ladies to play [that many] rugby games and there won’t be too many left standing,” he said.

Toughness comes up a lot in the conversation about rugby, and certainly it’s important within the framework of building the United States Army.

“We are trying to build cohesive, diverse, winning teams,” said Buddie. “You one look at our rugby teams and that’s exactly what they are. They’re as cohesive as any group that we have here, they’re diverse, and they’re winning.”

“Rugby is ground combat,” said Buddie. “It is the epitome of how we’re going to be able to fight and win wars, and that’s by being more mentally, physically, and emotionally tough than anybody or anything we come up against. Rugby is like this awesome petri dish of teaching diverse, effective, winning teams. It’s a tangible example of all the things we try to teach—we learn about military history, tenacity, grit, toughness, effort, strategy, organization … and we get to keep score.”

Sports of course also is an enticement to attend West Point, and winning a championship certainly shows the rugby community that the institution is serious about the game. The support from alumni, including the Anderson Family that lends its name to the rugby complex at the Academy, has been crucial to building success in both the men’s and women’s programs. This D1A championship, along with the women making the NIRA final, Williams winning the Scholz Award, and Kaitlyn Schwarting being a finalist for the Sorensen Award, all are payoffs for that support.

Get to Know the Sorensen Finalists: Kaitlyn Schwarting

“If you’re a rugby player, you know there’s no such thing as an ex-rugby player. It’s such a unique community and the alumni follow how our teams are doing. So to go 15-1 and win a national championship is icing on the cake.”