The Castle Rock Pirates stepped up into D1 HS action in Colorado for 7s and the move paid off.

The Pirates cut a swath through the Rugby Colorado D1 competition to take the fall 7s season title. Castle Rock joined forces with the Highlands Ranch club, but still see themselves as a D2 team in 15s. They felt they could perhaps do something in 7s in D1 however, but also knew it was a bit out of their comfort zone. That was spelled out quite clearly in their first outing when they went 0-3.

But the coaches told the players to learn from it.

“We told the boys that wins, losses and scores don’t matter to us," said Coach Robbie Winter. "Focus on your individual roles, play as a team, trust one another and results will follow. And what a result they’ve gotten.”

Junior Grant Heideman has led that effort by being strong in contact, elusive on attack, and being accurate in his passes. Basic skills being key, the leading players are showing that that is how the Pirates can win. Halfback and playmaker Spencer Howland has been a Pirate since he was in U8s, and is elusive, smart, and leads by example.

Tylan Osborn, another Pirate veteran, has strength and pace to burn and is all kinds of trouble on defense. Supporting those players the likes of top try-scorer Heath Norton and hard-nosed tackler and clearout artist Zach Conti.

The Castle Rock Pirates pulled it together over the course of the six-week series and finished 8-0-1 over the last three outings earning 100 points overall to takes 1st in the first of four with Valor, East, and WeFaMo (combo team comprised of Weld, Colorado Springs Falcons, and Monument) following.

(Top team of each week in bold. Lowest finish of the season (in italics) is dropped from points total)

Castle Rock accomplished this by winning the last three tournaments of the series.

This weekend will be a separate state championship final tournament, with Castle Rock taking on WeFaMo while Valor squares off against East to determine who plays for the tournament trophy. The Pirates certainly have their eye on some more treasure.

The Boys D2 season has the Hammers leading a pretty tight race. This points system is seeding the final championship tournament.

The final tournament is set up as follows:

Teams will play round-robin in their pools with the pool winners playing for the D2 state championship and the 2nd-place teams playing for 3rd.

The girls tournament is also split between D1 and D2. 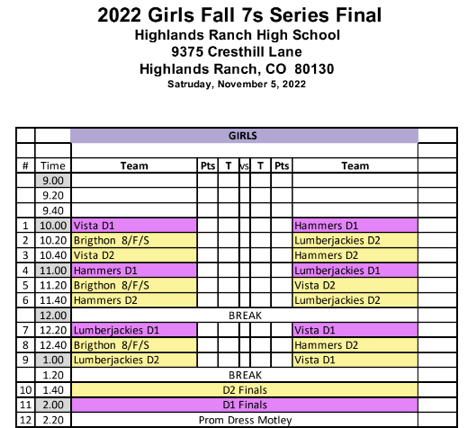