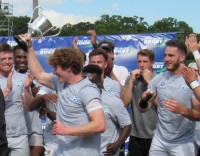 Lindenwood defeated Life 24-14 in the final of the Men’s CRC Monday afternoon, surprising many who expected Life’s high octane attack to get the better of the Lions.

But unleashing a physical, aggressive defensive strategy, Lindenwood took away Life’s ability to exploit space and got in the faces of the Running Eagles.

Life opened the game well with a big run from Darius Law, but Law was unable to ground the ball once he crossed the tryline, giving one of a couple of letoffs Life presented Lindenwood.

Life did finally get over, but Lindenwood answered right back, working a nice movement to put Evan Williams in at the corner.

In training, Lindenwood Head Coach Josh Macy and his staff run the team through non-stop playing periods of 45 seconds. But every now and then the players are expected to play for longer, sometimes twice as long, and they never know when that hammer will fall.

With time almost up in the first half Life tried to attack and score a key second try. Lindenwood defended well and stole the ball, attacking down the left wing. Life’s defense was there and the tackle jarred the ball loose.

There it was, bouncing about six meters from the Life tryline. What would have been advisable would have been to pick up the ball and kick to touch to end the half. Instead, a Life player fly-hacked the ball down the field. It landed right into Lindenwood hands, and they shipped it wide to Stephen Alberts, who raced in at the corner.

So, instead of going into halftime with a slim 7-5 lead, Life was down 10-7. It was a massive momentum shift.

Lindenwood continued to advance hard on the Life backline, hitting players just as they passed. Even if the pass found a teammate, the passer was now on the ground, and the guy who caught it had no one to help him.

Once Lindenwood got to ball back a nice long period of continuity finally saw Coleson Warner set yp Evan Conlon through the middle. A nifty little loop move allowed Warner to set up Shivan Dukhande for the backbreaker. George Phelan got one back for Life, but they really had no answer.

Lindenwood won the restarts, won the space, sent subs such as Evan Conlon to be terrors on defense, and were pests in the breakdown.

The game culminated a superb season for Lindenwood, where they were likely the best 15s team in college rugby and now the best 7s team. Rudy Scholz Awards winner Emmanuel Albert capped off an award-winning season in 15s by being an effective worker and battering ram on the 7s team.

Evan Williams was named MVP, while Waner and Manus Spangenberg were hugely influential.

Life, led by Phelan, brothers Darius and Donovan Law, and the elusive Ishma-eel Safodien, at times through the weekend looked unbeatable, while Lindenwood had to struggle on occasion. But that also meant that Lindenwood had had to deal with difficulty, while Life had to adjust in the final, against their biggest rivals, and by that time it was too late.