Australia were crowned World Series champions in a wild finish in LA. Just one of the special moments in a delightful tournament in August. David Barpal photo.
09.04.2022 - Alex Goff 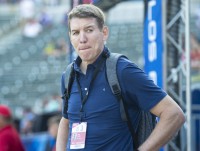 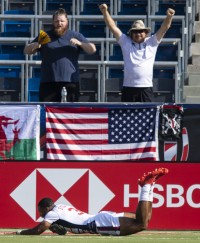 The obstacles for the LA Sevens have been pretty imposing, but in the end the marquee tournament on the American calendar has come through.

Yes, true, the entire Sevens World Series was hit hard by the COVID shutdowns. But consider that the LA Sevens had just started its new chapter at its new home and then couldn't follow up for 30 months. The entire reboot of the USA stop on the World Series circuit was supposed to take a little time to get back to the levels of attendance reported out of the previous iteration in Las Vegas anyway and the March, 2020 effort was the first in a series that, by last March, should have been staged three times already. But no, the shutdowns meant no LA Sevens in 2021 (although there was the Quest for the Gold Tokyo warmup event), and 2022's pushed back to ... August.

In the end, it worked out about as well as it could. Organizers AEG, with Dan Lyle running the show, changed the Fan Festival, adjusted the music offerings and the food offerings. On the food they learned that the fans really loved the food vendors from the various rugby nations—so there we more of those.

Then they had to work to get fans there when it wasn't the idea time, and the whole concept had been essentially dormant for over two and a half years.

"This was the hard one," Lyle told Goff Rugby Report after the 2022 LA Sevens was done. "We had to handle the questions of: 'will people come in August; with no being able to have the Invitational as big as before because colleges were already back at school, could we make that work?'"

"Everybody was happy to be back," Lyle said. "Universally people were just happy for the opportunity. We made some changes and did some things that were well received. It doesn't mean we ticked all the boxes, but the vibe was good, the rugby was good and the general feeling was people wanted to come back. And we want them to come back with a friend."

The event itself seemed a little better organized. The food was easier to find. Getting to the venue and finding out where you have to park was easier—the interesting marriage of old and new systems (parking app combined with grease pencils on your windshield) made it a smooth process to get in and out. That's one of those boring details that, when it works, no one notices, but when it doesn't, everyone remembers.

The players were also very positive about the experience.

"We've been really well taken care of," said Ireland's Terry Kennedy. That was a sentiment echoed by other players from various countries.

And the results cooperated. The USA beat South Africa in the opener, charging up the enthusiasm from USA fans. And the teams that bring a big fan base saw their teams make the quarterfinals and more. Several players from different nations said "this is like a home tournament." That's a good thing.

Where the rubber meets the road with the LA Sevens is that it's a business. It has to be a successful business venture, which means the parent company (AEG), sponsors, players, and most importantly, fans and World Rugby, have to be happy. If there isn't a good vibe (to borrow Lyle's term) then the fans and World Rugby won't want to come back. Same story with the sponsors.

Not only were the fans there, they were enormously enthusiastic.

Enthusiasm counts for a lot, and when there's a consulate general from one of the countries in attendance getting all excited because this is a touchstone event for his country, and a way to connect with his community in the USA, then you could see that enthusiasm grow into partnerships, more fans, and better things for American rugby.

Sponsors too ... or more accurately, potential sponsors ... were there and saw the uniqueness of Rugby Sevens. It's not just the numbers of people, but how many were there all day, both days. That's a more in-depth marketing opportunity.

Some sights and sounds from Day One at the @LASevensRugby pic.twitter.com/LKZIxYtvEh

Now for the Numbers

Attendance on Day One was 16,356 and on Day Two was 14,298, for a total of 30,654. Is that good? We have to say here at Goff Rugby Report World Headquarters were expected less, perhaps 20% less. With few Canadians, no college students, and the aforementioned long layoff, we and many others expected a dropoff. This was less than 2020, but the difference is 2%—2020's total attendance was 31,257. As we explained back in 2020, AEG measures paid attendance. They don't count players, staff, and officials. So it's a pretty transparent number and should be seen as a win for the tournament.

One other thing about the fans. We noticed this in our wanderings, it's evident in the photos and some of the video we took, and Lyle confirmed it—this was very much of a family event. A lot of families attended and the number of youth tickets was high. This is a good thing. If kids have a good time, parents will move Heaven and Earth to make sure they have that experience again.

With World Rugby rumored to make changes in how the World Series is put together, they are still looking for that excitement level, that growth potential ... that vibe. LA looked like it delivered, despite the obstacles. Come next March, when it is back in its proper place, we might see a big step forward.