It's Back! Army At Navy This Weekend

It's Back! Army At Navy This Weekend 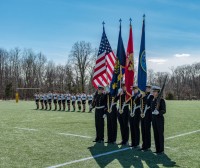 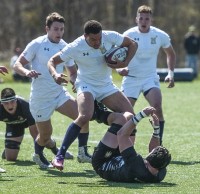 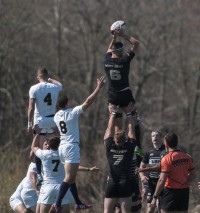 High-level men’s college rugby returns to the field with West Point at the US Naval Academy Saturday in Annapolis.

The two longtime rivals are two of the very few college teams able to compete, with players having gone through a strict bubble and then training since summer.

“We’ve been really happy with the effort and focus our guys have been putting and we feel like we’ve been improving at a rapid rate, which has been exceedingly rewarding and pleasing,” enthused Army Head Coach Matt Sherman. Nonetheless, it’s always a bit tough to measure yourself when you haven’t been tested against unfamiliar opposition, and we’re looking forward to that challenge.”

Navy Head Coach Gavin Hickie agrees that it’s easy to be in a bubble when you’re in a bubble.

“We are looking decent,” he said cautiously. “It's difficult to gauge, as our last game was against Saint Mary's in March, 2020. Since then, obviously, we have had the Class of 2020 commission into the Fleet. So, we are untested with this group but no better way to test ourselves straight out of the blocks than against Army.”

Getting Through The Protocols

“We have had a long road to get to this stage,” said Hickie, and that’s been true, in some ways, of everyone. Every team trying to play has had to go through it all very carefully, which means handling the preparation in a methodical way. For coaches and student-athletes who are eager to get started, that can be difficult.

“We started off in small groups and went through our resocialization protocols over a five-week period. The entire Brigade has spent time in isolation with a lot of restriction of movement. It has been very tough on all the Midshipmen, but we appreciate that without following these steps diligently, we would not be playing on Saturday.”

Sherman described the entire process at West Point as “challenging but manageable.”

“Early on was the most difficult and as coaches we’ve learned to spend a lot more time coordinating logistics of numbers and space to ensure we are meeting protocols, but it’s doable and we are just grateful to have the opportunity to train and compete,” said the former USA international. “I’m really proud of our guys who have done a fantastic job maintaining their vigilance to ensure we’re doing everything in our power to keep our environment as safe as possible, and we’re grateful for the Academy leadership, who have been phenomenal in providing the structure to enable us to do so.”

Players will be tested during this week leading up to the game.

OK, enough about that; what about the players? Both programs have of course seen experienced players move on to serve their country. For Navy, seeing Erick Bleakley and Jermaine Oliver graduate is a loss to the team.

“They were huge for us last season,” said Hickie. “But as always we expect the next group of players to step up and fill the shoes of all the guys who have commissioned.”

Navy isn’t really able to recruit players the way some varsity programs do, but the Midshipmen do pretty well regardless. This year, newcomer Sean MacLaney from the Union County Mudturtles in New Jersey is one to watch.

“Whenever we get a Midshipman come to us who has played rugby before, it is a nice bonus!” said Hickie.

At Army, they had a very strong team last year and many of those players have now moved on.

“The Army rugby class of 2020 was a special class with some very talented players and as a group we will miss their passion and leadership which were driving forces in all four of their years here. With that said, they have instilled these behaviors in the next generation and their legacy continues to make a positive impact through the current team,” said Sherman.

And then they’ve brought in Dominic Tianga, an explosive player who could probably suit up anywhere on the field and make an impact. Tianga helped Queens University Charlotte win a national DII title last year before gaining acceptance to West Point as a transfer.

Scrumhalf Tiaan Mosconi is skillful who has great potential to develop as a leader, while flanker Lucas Pattinson reads the game very well and has a nose for the ball. Tianga, Mosconi, and Pattinson had extensive time in the Eagle Impact Rugby Academy program, with all going on major tours.

The thing is, whatever hoops they had to jump through is worth it because this rivalry is one of the best in college rugby — rivaled perhaps by Cal vs Saint Mary’s or Life vs Lindenwood, but this one has so much non-rugby history to it.

“If we had said a year ago that we would find ourselves in this pandemic, but only allowed to play one opponent, we would pick Army,” said Hickie. “The rivalry runs deep but so too does the respect.”

“It’s an incredibly special and unique rivalry and such a rich experience to be a part of,” added Sherman. “These young men from both institutions are the best of the best, the future of our country, and this rivalry is an opportunity for them to push each other as competitors to higher heights as men and leaders, something both sides will benefit from when they rely on each other in the future as brothers in arms.

“I’ve never been a part of rivalry that’s so fierce, but also retains honorable levels of sportsmanship and respect. To me, this is what sport is all about”

As he’s the host, we’ll give Hickie the last word: “There are few times in life when we get to take the field against our opponents and do everything we can to beat them, yet knowing one day, we may indeed be teammates on a different kind of team.”

This series has been running Army’s way for the most part over the last several years. We have scores from every season from 2003-04 (if we've missed one, let us know). That list covers 18 games, of which Army has won 12 including four in a row from 2015 to 2018. In 2019, the last time they played, Navy broke the streak and won 17-10. Of the last 10 results, seven have been decided by a try or less, with almost all of those decided on the final play of the game (either with a score or a score denied close to the line).

Despite Army winning 11 out of 16, on average score per game the teams are separated by fewer than three points.

One West Point cadet, talking about the 2019 game told Sherman that he was wearing his FitBit watch on the sidelines and his heart rate registered 155 beats per minute. That tells the story.