This HS Program Had Two Players Drafted By The MLR

This HS Program Had Two Players Drafted By The MLR 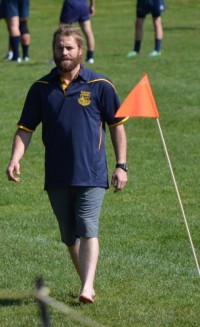 Of the 24 players who were drafted in the recent Major League Rugby draft, 19 played rugby in American high schools representing 18 different programs; so our math tells us that there was one high school program that had two draftees.

Considering how many high school teams there are out there, it’s unlikely to see one program double up, but that’s exactly what happened with the Budd Bay Barbarians.

(Full disclosure; this writer is a former co-founder of the Budd Bay Rugby club and served as an assistant coach for the Barbarians a long time ago—18 years ago in fact.)

Based in Olympia, Wash., and serving players from Olympia, and adjoining towns of Tumwater and Lacey, and even further afield towns such as Yelm and Tenino, the Barbarians began in 2000 as the Capital HS team. In its inaugural season in 2000, the program, under then-Head Coach Pete Sullivan, finished 2nd in the the state and won what became the Tier II bracket at the HS national championships.

A year later, that team won the state and finished 5th in the nation, losing only once at nationals, 13-10 to Xavier HS.

Having formed a men’s team in 1998 (the Buffaloes), the Budd Bay Rugby Club started the boys team in 2000 (the Barbarians), a girls team in 2002 (the Steelheads), and a women’s team shortly thereafter (the Bandits). Every single one of those teams has won regional or state championships at some point.

Among the well-known alumni of the club are MLR draftees Lui Sitama and Tommy Clark. Both played at AIC and both were taken in the 1st round, Sitama by Austin, and Clark by Dallas.

In his interview with GRR as a finalist for the Rudy Scholz Award, Clark credited his time at Budd Bay. A big-time football player in the area, Clark was talked into playing rugby with the Barbarians in 2014.

“I had some Polynesian friends on the team and they got me out, and since them passion grew into rugby,” he said. “Trevor Anderson, the head coach over there got me going.”

“Tommy brought such athleticism to the team,” Anderson told Goff Rugby Report. “I felt like he was good enough to get a football scholarship in college, but he just changed his focus to rugby and we were pretty fortunate to have him. We had a really diverse team back then and some good athletes. We got the coaches all together to coach him up and he was a big part of that 2015 state championship team.”

Clark actually was injured in the 2015 final, but his teammates managed to hold on for the win.

Sitama, meanwhile, was a little different.

“I grew up with my family from Samoa and I knew the game,” he told GRR. According to Sitama, he still had a lot to learn, but Anderson, who is also a co-founder of the Budd Bay Rugby Club and coached the team at the time, said he didn’t have to do too much.

“Lui was special from Day One,” he said. “He was around the team for a long time and when he started playing he was just a stocky kid, real humble, who had the skills. I remember we took him out for this dropkick challenge somebody was doing, and we filmed him hitting drop goals from 20 meters, 30, 40, and even 50. We filmed it, it wasn’t a fluke, he was just putting them over.”

Sitama remembers it a little differently.

“I knew about the sport but I didn’t really have the skills,” he said. “Trevor Anderson helped me learn all those little skills, the passing, the proper way to tackle. I liked being physical but it was doing things the right way that got me to AIC and allowed me to play.”

Sitama grew up playing with his dad’s friends and then in the cauldron of Washington state rugby, which is very competitive. He needed to adjust when he joined AIC because the level of competition, and the physicality, was different. He was used to playing against players much digger than he, and that experience will stand him in good stead as a pro.

Both players went on to play for the Washington Loggers select side, and then both went to AIC and led the Yellow Jackets to success there. Both said they are very grateful for their time with the Loggers, AIC, and with Budd Bay.

The Budd Bay club has gone through several transitions, changing coaches and changing leadership, but has come through all of that still able to produce talented players and successful teams.

“It’s a really great diverse community, and I think we should be pretty proud of having two kids like Tommy and Lui who got drafted,” said Anderson. “I think rugby just needs to be put out there. When you get the coaches and the enthusiasm and make it available, the kids will come out and they will love it.