Get to Know the Scholz Finalists: Larry Williams

Get to Know the Scholz Finalists: Larry Williams 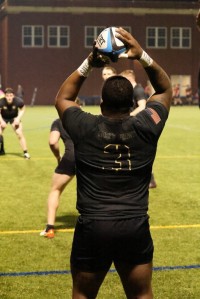 West Point tighthead Larry Williams has been known to GRR readers for some time.

A powerful block of a front-rower, Williams was named one of GRR’s top D1A Freshmen in 2020—The Top Freshmen In D1A— and was featured in a 2017 report on the North Carolina HS All-Stars winning big in the Regional Cup Tournament in Georgia, where he was co-MVP—North Carolina Sweeps in South RCT.

Now he is a Scholz Award finalist and most certainly one of the most impactful collegiate rugby players in the country.

“I am extremely humbled and honored to be selected as a finalist for such a prestigious award,” Williams told GRR, but he was quick to back away from the individual nature of it all. “My being selected for this award has very little to do with me as an individual player. Every single one of my teammates and coaches pushes me to be the best player I can be every day both on and off the pitch. Without them continuing to push me in practice and challenging me to become the best player I can for the team, I would not even nearly be in the position that I am today.”

Williams can do it all. He’s a pusher and a grinder, he can run and defend in tight and in the open field, and he’s often called on to handle the lineout throws as well. His ability to handle any type of situation is why he’s a finalist, and Williams credits his coaching.

“I started playing rugby my freshman year of high-school with the Clayton Copperheads so that I could stay in shape for high school football,” Williams said. “My dad’s friend is the one who initially suggested I try it out. Little did I know that I would fall I love with the sport. I remember my first game having no idea what I was doing and having the most fun I had ever had.”

This led to the stint with the North Carolina team, then Eagle Impact Rugby Academy and the HS All Americans.

“Along this journey is when I met coach Sherman. I was doing some training [at West Point] and I knew from the moment he showed us what the Army rugby team was all about, that I had to be a part of that legacy. Rugby has given me the opportunity to travel to Ireland to play and to Canada also. I am so grateful for my high school coaches and programs because they introduced me to the game.”

Now that journey has brought him to the D1A final. It is easily the furthest Army has gone in the D1A playoffs and while Williams certainly is a big part of it all, he quickly circles back to the others who wear the Black Knights jersey.

“Playing high-level college rugby with my teammates means everything to me,” he said. “The time in the jersey is finite and I know that one day I will no longer be in an army jersey. But I know that I fully take advantage of every moment I have with them playing the game because I love each of them with all of my heart.

“We discuss how we need to make the most out of the time we have and that we need to leave the jersey in a better place, adding to its legacy. I would do anything for my teammates because I know they have my back and I wouldn’t want to be playing rugby anywhere else with anyone else.”