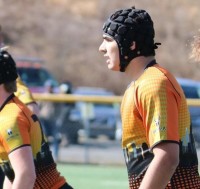 It's time to bring back our Gamebreakers column as boys HS rugby is now in (almost) full swing.

We saw some excellent clutch plays and strong performances around the country this past week, from West Virginia out to Southern California. Here's a look at some special efforts from High School rugby around the nation:

With time up against KC Junior Blues, and with his team behind 10-8, Lee, playing wing for Germantown, scored the try to put his side up 13-10. With the conversions, Germantown won 15-10 on the last play of the game.

Germantown Over KC In Dramatic Fashion

The Brother Martin prop was a rock through a tight game with New Orleans Jesuit, and with time just about up and his team down 21-17, it was Schmidt who burst through on a massive run that set up the winning try. Brother Martin prevailed 24-21.

In a very impressive win over St. Ignatius, starting locks Peacock and Saxon, along with impact sub Riera, were superb. Using their size but also a ton of tenacity and intelligence, they kept the St. Ignatius defense on the back foot, consistently broke the gain line, and were solid in the set piece, especially the scrum. Bigger than most high school locks (all three are about 6-4), they don't just rely on their height and add a bit of grit and plenty of knowledge of the game to take control.

Playing No. 8 for the Mustangs, DeVault was a crucial ground-gainer against a very tough Tempe team, pacing San Diego to a win in Arizona 27-19.

Strake Jesuit defeated St. Pius X 31-7 and No. 8 Garcia was at the center of that, playing well defensively and scoring two tries.

In the opening preseason weekend in Southern California, Wilson and Nelson led an excellent defensive effort to lead the Thunder to two close wins over La Jolla and the OC Raptors.

The Tempe back has been on a try-scoring tear all season.

Playing lock, Erigo showed a range of skills as he helped Naples defeated Key Biscayne in a close one. Erigo scored a nicely-taken try on a run in open field where he showed the baance and elusiveness of a back. He then scored the old fashioned way, busting through the line from close in.