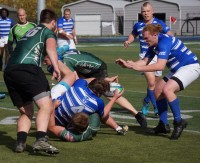 This weekend is loaded with really good matchups and games key to the various conference playoffs.

Check back here for scores.

Upstart Providence, having edged Coast Guard 12-6 last week, gets to back that up vs Sacred Heart. One result doesn't make a season, though, and Head Coach Mark Simpson-Daniel knows that.

"I think we're progressing steadily. Like most clubs, a lot of our focus this season has been on reestablishing ourselves after the extended COVID break," said Simpson-Daniel. "For us that's meant spending a lot more practice time on the more fundamental areas of our game than we would've had to in previous years. Our aim now is to build on that foundation so we can compete with some of the larger teams in the conference."

A big part of this season has been managing expectations added the coach.

"This is our first season as part of the NEWCRC and we knew from the get-go that we were walking into one of the toughest leagues in the country," the coach told GRR. "It's something we're excited about because it's forcing us to rapidly improve as a team but it's also daunting knowing that any team in this league is capable of crushing us if we're not on our game. We have two remaining matches of the regular season against Sacred Heart and Boston University; we're expecting both to be tough, tight matches and we'll need to keep improving to have a chance against either of them."

Captain Niall McStay, vice captain Johnny O'Connell, and No. 8 Christian Larson have led very well for the Friars. The key for them is they have led on defense and done the unselfish stuff to make everyone better.

Marquette Makes a Statement with Win Over UW-Platteville

The Joy of Playing Returns as GVSU Takes on Calvin

Boston University keeps marching on despite losing a ton of players during the COVID shutdown. Major improvements in the set piece have seen them improve, too. So this week's #21 (BU) vs #4 (Norwich) clash may be closer than that. Norwich Head Coach Bob Weggler's team might have had a bit of a head start over some teams because more of his players were at least on campus last year. As a military college, Norwich was more able to enforce protocols that allowed students to be present. It worked, the rugby team battled to get back on the field for a game against Army, and that, said Weggler, mattered.

Still, he returned only one starting back for this season and only half his forward pack. "What we have is a young, unselfish team with a really good culture that shares the ball," he said. It was that ball movement and sharing of responsibility that saw them open up against a tough Vermont team. But Weggler also said "sometimes the breaks go your way and I think against Vermont that's what happened. The game was a lot closer than the score shows."

In the SCRC we see Middle Tennessee State and Memphis, #15 and #16, meet up. While the SCRC has playoffs, this is certainly a clash that will show who has the upper hand in the conference. However ... don't sleep on Auburn, who lost to Memphis by a try. They could certainly come on late.

In the Southern it's finally time for Belmont Abbey to judge themselves against the best, with the #17 Crusaders facing #1 Furman. This could have connotations in the rankings and in the Southern standings, where both are 2-0. More of a question, though, is Citadel vs UNC-Wilmington. Both are 1-1 and chasing 3-1 UNC-Chapel Hill. But UNC-W has already played and beaten North Carolina, while Citadel lost a close one to the Tarheels. Citadel has the edge in bonus points, so really this game decides who gets 2nd in the Southern Premier East. Led by Ben Savage, Sam Kusnitz, and Mathieu Thuiller, Wilmington is strong up front and plays very good defense. They will need to.

In the Great Midwest there always seems to be a high-ranking clash, and this week it's #12 UW-Platteville trying to rebound from a disappointing game last week against UW-Whitewater, who slammed UW-Milwaukee to improve to 1-1 after an opening loss to Marquette.

"In general, the team addressed a number of shortcomings from the Marquette match and showed their ability to work as a highly functioning team," said UWW Head Coach Pat O'Connor. "They will continue to address weakness and continue stressing playing rugby at the speed of rugby. Ten of our starting lineup are in their first season with us and improving daily."

And we know that the MARC is still a massive question-mark, so every game matters. Bucknell has emerged out of the small-college ranks to be a front-runner. Seth Gazes says the team's set piece work and defense have led the way, but it's really about something else.

"Our team president last year, Tom Golden, did an incredible job keeping the boys motivated and finding ways to recruit on campus," said Gazes. "He was our lone senior last season and didn't have much to play for other than to pay it forward and grow the program. The university did a great job keeping students on campus and safe last school year, even though we were not able to play any games we were able to practice regularly and in actuality given the restrictions on campus was one of the safer activities for the students on campus to participate in. Recruiting was really word of mouth, and giving the boys a good outlet during the COVID restrictions. Practicing all last year without any contact—per university rules—really allowed us to introduce the game differently to new players, developing the catch/pass and finding space on the field before adding in the complexity of contact."

So credit to last year's club president, who didn't get to play, but did something for the team anyway.