A reminder that we are ranking only those D1A, NCR D1, and D1AA teams that are playing significant seasons in the fall.

We are lumping all of the D1s together because there's so much mixing at the moment. Generally speaking it's highly unlikely for a D1AA-level team to be ranked higher than a strong D1A team, but there are cases of D1AA teams being ranked above D1A teams that aren't at the top of the list. (And remember that NCR's D1 is close to the D1A level, depending on who we're talking about.)

We have three graphic representations of how the divisions overlap. The first graphic is a radar chart showing the rankings distribution. The closer you are to the center, the higher ranking you are. Now, if you came with the premise that D1A is stronger than NCR D1 which is stronger than D1AA, then you'd have three of these nautilus shapes completely inside the other (with the better ranked divisions producing the smaller shapes). Like this : 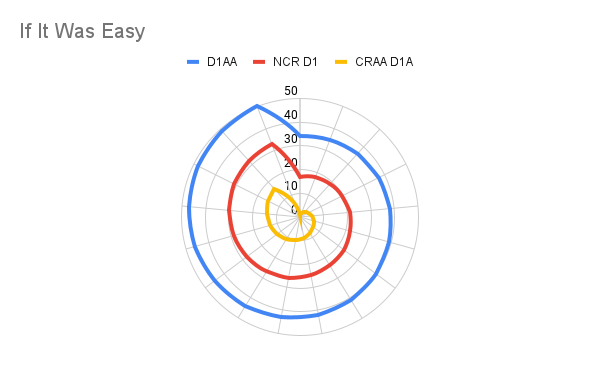 But there is crossover and it's not easy. Not every D1A team is stronger than every NCR D1 team, and not every one of either of those is stronger than every D1AA team. In addition, we don't have an equal distribution of teams in each division. The whole point of NCR's D1 is that it's a fall-centric competition, so there are more NCR teams in play.

Anyway, here's how the radar chart actually turns out: 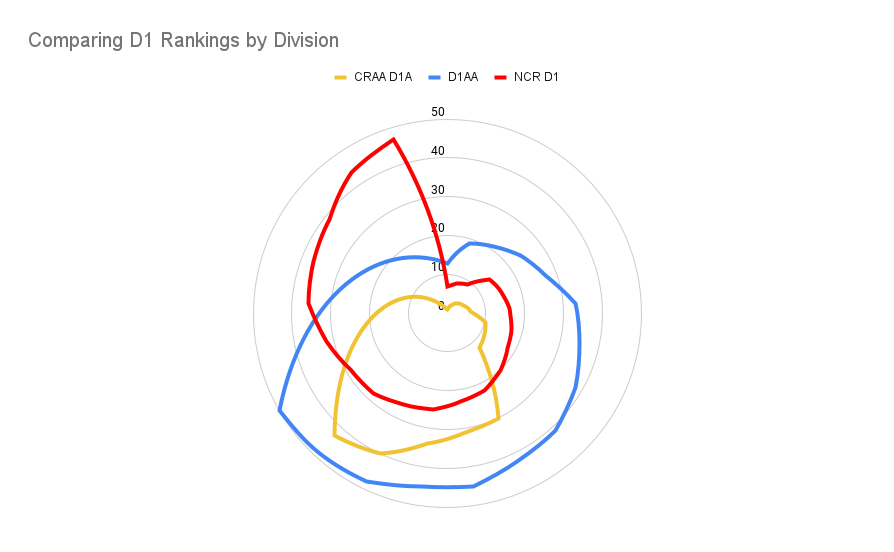 Support what we do with a donation to Goff Rugby Report! Go to https://www.goffrugbyreport.com/support-grr to learn more!

Now, down to the rankings.

We hit Mary Washington a bit hard for a simple COVID postponement and they won this week to they bump back up. Fairfield's defeat of Iona gives them a massive boost, and Marian gets a nudge too. Nazareth, thanks to a close loss to Dartmouth, and AIC, thanks to a defeat of Northeaster, both enter the Top 50. We drop out Illinois and Kansas. For Kansas this might be a temporary drop. They don't play conference play for a few weeks so their idleness will not help them as other teams are active. Illinois can easily bump back up.

Colorado fans will probably throw their hands up since Colorado won and moved down. But this is a case of some other teams moving up past them with more games under their belt. For both Colorado and Colorado State, the end of September and the beginning of October, when they both face BYU, is the big test. If they can hang at all with the Cougars, they should move upward.