The Classic Story of Danny Giannascoli

The Classic Story of Danny Giannascoli 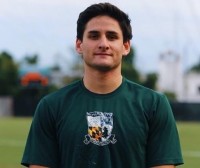 The Danny Giannascoli journey to being drafted by Major League Rugby’s Utah Warriors is in many ways a classic rugby journey in which good coaches and sometimes daring decisions all have a hand.

One of only two players not in D1 college rugby to be drafted, and the only one from a school in the competition-formerly-known-as-NSCRO (now NCR), Giannascoli wasn’t an obvious draft choice, but he got noticed because he doesn’t let any of those labels stop him.

The former captain of Loyola of Maryland, Giannascoli is, at 6-2 1/2, 200, fairly robust for a small-college flyhalf/fullback. Growing up in suburban Philadelphia, he played all kinds of sports, especially soccer. Those kicking skills have been on display since he took up rugby, but so have his leadership and his desire to get better.

Giannascoli’s older brother, Matt, played in high school and then at Loyola and persuaded Danny to try the game. He waited until his senior year to do so.

“I knew I wanted to play a sport in college, but I wasn’t sure which one,” Giannascoli told Goff Rugby Report. He had considered becoming a kicker in football. “But after my brother introduced me to the sport, it was pretty much rugby right away. I could kick pretty well because I’ve played soccer my whole life, so to play a sport when I could kick and run with the ball was perfect for me.”

Giannascoli played his senior season at Malvern Prep and then joined Loyola, where he was all-conference all four years.

He was also a two-time NSCRO All-American, but understood that he probably needed to challenge himself further if he wanted to be noticed.

Giannascoli was an effective flyhalf, but mostly a passer and a kicker. His kicking basically controlled the Loyola game plan, as he was able to get 60 meters on some of his kicks, giving Loyola excellent field position. But despite being one of the fastest players on the team, he wasn't much of a runner early on. Cipriano and Giannascoli had discussed whether the flyhalf wanted to play in Europe, and the coach said if he wanted to do that, he needed to round out his game.

"We would spend time studying games, from all levels, and talk about what was working and not working, and he really became a student of the game," explained Cipriano. "He started to study strategy and tactics more."

And then Giannascoli started to implement that at practice. He began running players from different positions, asking someone else to be flyhalf while he ran the play in the role of the inside center, or the weakside wing. How could he understand the pattern of the game, he reasoned, unless he knew what it was like for everyone else? That approach filtered through the team, and everyone started doing it.

"There'd be a lot of frustration—'why weren't you there, you're supposed to be there,'" said Cipriano. "But everyone learned a lot about what needs to be done in order for something to work."

Giannascoli started to grow in confidence, and started to run more. As a result, Cipriano slotted him in at fullback. Giannascoli would kick downfield, but keep the ball in play. With the ball traveling a long distance, the opposition deep three was usually alone and would have to kick it back. The return kick was usually not as far as Giannascoli's effort, and then the Loyola deep three would counter. Most of Giannascoli's tries came this way.

And then came 7s. With that newfound confidence, Giannascoli sparkled for Loyola in the Arial Re 7s in Bermuda in March, earning the nickname X-factor because instead of a number he had an X on the back of his jersey. He had already spent a summer playing 7s for the Schulykill River men's club, but 2019 would be special.

The 2018 summer was one for learning and seeing what it takes to compete at the next level. In 2019 it started to come together. With his physicality coming to the fore, and with his vision and kicking skills, Giannascoli stepped into the premier side for Schuylkill last summer.

It was one of the Schuylkill River’s best seasons, as the team won the East Coast Super Qualifier, and then finished in the top four at nationals. Giannascoli was superb, adding a game-winning touchline conversion at the national tournament to his resume.

The payoff after that was an invitation to play for the Collegiate All Americans at the RugbyTown 7s in Glendale, Colo.

“That was a very gratifying moment,” said the flyhalf. “Being an NSCRO guy and called up with Life dudes, Cal Dudes … it was pretty cool to be there with them and contributing.”

Giannascoli built on that by suiting up for Atlantis in the World Club 7s in Barbados in December.

He has shown time and again he can play at high levels.

“I would say I was pretty prepared for it,” he explained. “Playing for Loyola, we’ve got a good team and the competition can be challenging. In-conference, it’s mostly us and Catholic University, but as you go through the playoffs it gets really tough. I definitely learned to play with a lot more confidence. Then during the summer I was pretty ignorant, really, of the jump in level. I could say that I could’ve used the experience earlier, but I just didn’t know that some of the guys I was playing against were professionals, and internationals and the rest playing for top clubs. I just didn’t really know that, and I don’t know if that was a good thing or a bad thing. In the end I just came out of it knowing I can compete.”

And he gives a ton of credit to the coaching he received at Loyola.

“Matt Cipriano really turned the program around and put us the map,” he said. “With him and with Kenny Ames, who also helps lead the alumni group that does so much for us—I wouldn’t be where I am now without them.”

Not just a rugby guy, Danny Giannascoli has earned his MBA and is currently learning to be a mortgage underwriter. He speaks French, thanks to his French grandmother, and understands that professional sports can be fleeting.

“It’s important to me to pursue a career outside of rugby and as long as I can do that, I am excited about the rugby opportunities,” he said. Giannascoli has not signed with Utah yet, but the expectation is he will. He is positive about the program.

“The coaching staff out there, Chris Latham, Shaun Davies, and Shawn Pittman, are great, and I am really looking forward to competing with those guys,” he said, but added that this only works “as long as I can continue my career.”

So, big surprise, he knows what he wants and he’s going to work hard to get it. But we knew that.