Around the National in Men's College D1 Levels

Around the National in Men's College D1 Levels

Here's a look at rugby around the nation in Men's D1 levels.

We check in on the Rugby East in detail here, where Army is still on top.

Davenport is 4-0 and has a bit of a layoff before facing Ohio State on October. Their first three conference games will be played in November.

Ohio State beat Bowling Green—see a detailed match report here—and Purdue lost a very competitive game to IUPUI in another non-conference clash. The other Big 10 teams were in conference play with Illinois holding off Wisconsin and Indiana defeating Michigan State 27-5. Sam Storey scored three tries for the Hoosiers as they bounced back from their loss last week to Davenport.

"Our guys have really taken to our new shape and are playing well and having fun," said CU head Coach Chris Hanson, who said the young Wyoming team had "a ton of heart."

Next up for Colorado will be BYU on Friday.

"It's a great group of guys that will be massively challenged next week. They are looking forward to it and are 100% up for the challenge."

Support Goff Rugby Report! Consider a one-time or recurring donation to help us continue to produce the content you love. Go here for more info on how to do that>>

Captain and inside center Jaxon Stokley scored three tries while leading the Bearkats to the victory. Senior flanker Nate Wright and freshman hooker Drake Torno also showed well in what was a good start for SHSU.

In the Heart of America, Kansas overcame two rather difficult warmup matches to beat Missouri 22-7. This was a big day-o-rugby which celebrated women in rugby with a series of games throughout the day. The Jayhawks men, meanwhile, battled through to beat Mizzou. The teams entered halftime tied 7-7.

"It was a really gritty game," said KU Head Coach Andy Stewart. "Our defensive work and our tackle efficiency were really good and needed to be."

In the second half Kansas found their rhythm with the ball and started to run with confidence. That, said Stewart, came with trust in each other.

"They've started to discover how to work together," he said. "We had to go through two tough games to get here but we are starting to gel."

No. 8 for Missouri, Cameron Gillespie, was a standout and very difficult to contain. For Kansas the players of the game were veteran center Matt Barr and freshman wing Jonah Dolphino. Barr tested defenses with his direct running and was hugely effective until a broken collarbone took him out. Dolphino was making his debut for the Jayhawks and was very quick, creating scoring opportunities and covering in defense.

Rowan improved to 2-0 after beating Temple 40-22, and that's all simply a case of players understanding what they need to do, said club president Dante Lorenzini.

"Collectively as a team we really all stepped up and fulfilled our roles," Lorenzini told GRR. Several of those were reserves who are still building their experience. "But they trusted their teammates and knew their responsibilities. It was great tp to see big improvement and see the team click on the pitch."

Rowan is in good position to do something in the MARC and Lorenzini said the Profs have high expectations for this season and "we are focused on completing those objectives with the discipline and training we focus on in practice every week."

Outside center led Rowan with two tries and the backs overall had a good day. Flanker Derek White the defensive effort with his physicality and effective tackling technique.

St. Joseph's also won, taking a 47-22 decision over Maryland to improve to 1-0-1. The Hawks got tries from backs Tommy O’Connell, Aidan McMullan, Kyle Stine, Matt Kelly, Will Woods and forwards Connor Hohman and Patrick Slavtcheff. This allowed them to keep pace with a James Madison team that has started really well and is now 2-0 after beating West Chester 52-12.

Nobody did anything too unexpected in the MAC. Bowling Green played and lost to Ohio State while IUPUI, led by a huge game from flanker Jaxson Schoenlein and with Jake Ballinger and Nigel Eavns each catching a brace of tries, beat Purdue 37-26. Scrumhalf Nate Hassion set up several of his teammates in that game.

Louisville won big over Pitt and looks in excellent position in the conference, while Western Michigan put Ohio to the sword. Cincinnati edged Ohio 19-10.

It's a quiet weekend for the conference next week but Bowling Green does play IUPUI.

The Southern Conference gets a look here>>.

Meanwhile the NDC D1 level of the Liberty Conference is examined here>>.

Here's a photo of Pablo Lavilla scoring for Brown though. 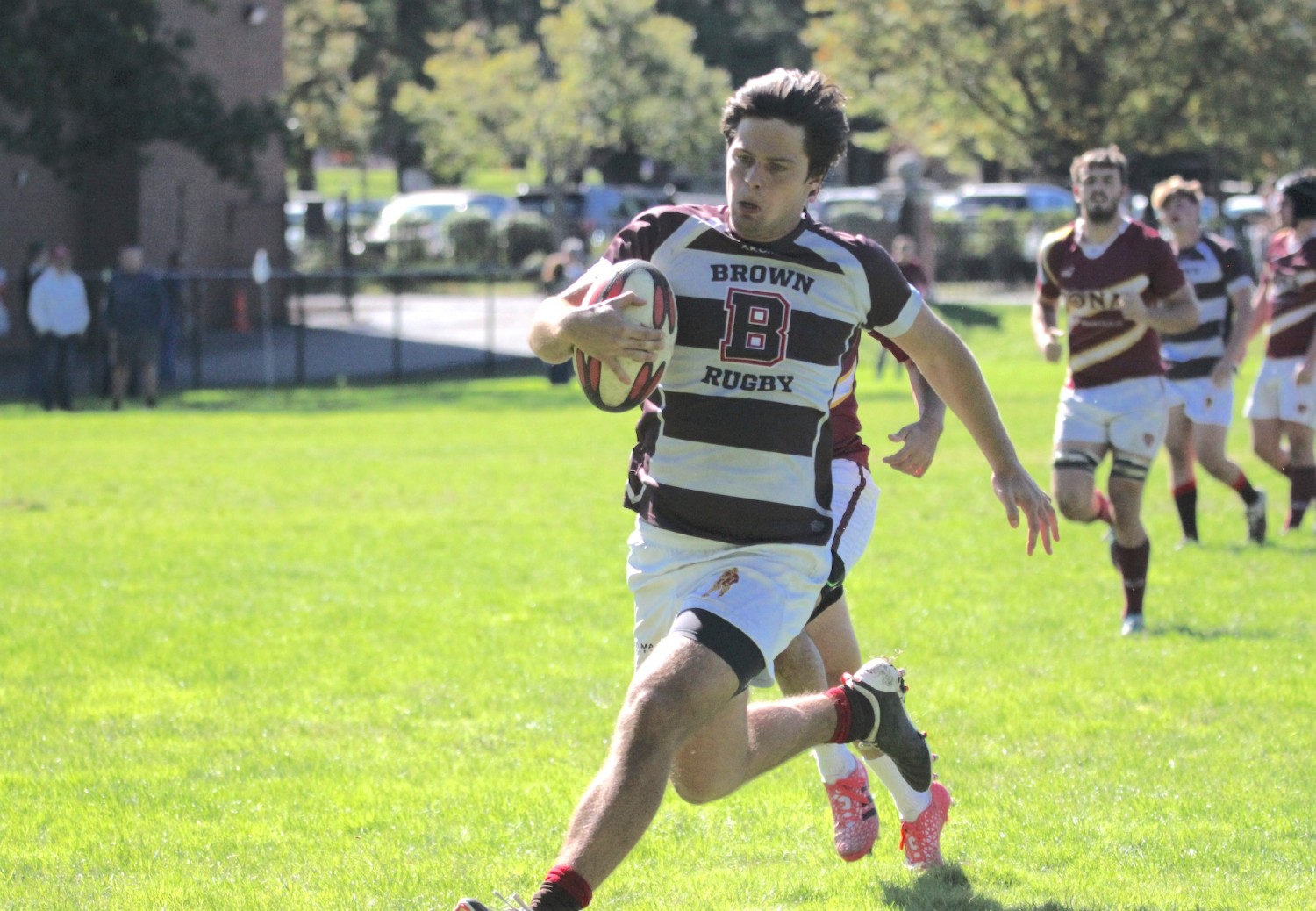 In the 2nd tier of Liberty's action, the D1AA level, Oswego beat Albany, while Binghamton (32-26 over Cortland) and UMass (14-10 over Columbia) were engaged in tight battles. Boston College and Siena, who didn't play conference games this week, are still on top.

For Binghamton, the victory was their second win after an opening loss to Tier 1 Syracuse.

Wing Cody McEvoy scored two tries for Binghamton while center Liam Heanue and forwards Dan Ahern and Will Otondi all touched down once. Flyhalf Mike Davitt added seven points with the boot.

It was a weird game in that Binghamton ran out to a 20-0 lead only to see Cortland score three tries later in the first half. Binghamton's Heanue score his try in the middle of that and it was 25-17 at the break. Three Cortland penalties make it 25-26 before Freshman Otondi (Pelham HS), on as a sub, scored with two minutes left to win it for Binghamton.

After Otondi's heroics, Binghamton had to defend for another four minutes to finish off the game, which they did.