Rugby East Latest: Some Close Ones, Some Not So Close

Rugby East Latest: Some Close Ones, Some Not So Close 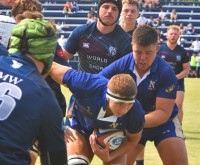 In a game that brought together two stingy defenses, Navy led 8-3 at halftime and scored two unconverted tries to win it 18-3.

Navy likes to work through multiple phases to starve teams of possession. Navy Director of Rugby, Gavin Hickie, gave credit to former Dartmouth Head Coach and now Navy assistant James Willocks for stepping in to help with Navy’s execution and clarity of their game plan.

“Navy has always been a team built on conditioning and fitness, but that does not carry a team anymore in the college game," said Hickie. "Rugby IQ has become critical in the success of a program at this level. James’s contributions have certainly impacted that part of our game.”

Navy took an early 5-0 lead off a scrum, with Ben Haugh going over. The teams then traded penalty kicks to round out the scoring in the first 40.

About 10 minutes into the second half UMW threatened but a turnover and big Lewis Gray run lifted the pressure on Navy. Eventually Navy got a kickable penalty and Roanin Krieger slotted the goal to make it 11-3. With time winding down Krieger sent a long pass to Gray who raced in for the second try of the game. Krieger converted, and that was it.

It ws a very tense game between SVU and Kutztown. Southern Virginia is a physical side with, frankly, not much to lose and they certainly brought the heat on the Bears.

SVU led 26-24 and with time running out Kutztown worked their way into SVU territory and got a penalty. Center PJ O'Reilly slotted the goal to win 27-26 on dramatic fashion.

St. Bonaventure found their offense after a very close opener against Notre Dame College. Bonnies scored 73 points to win 73-3. It actually took a while for Bonnies to score and in fact the Hokies led 3-0 after eight minutes. But St. Bonaventure's ability to recycle and keep the phases flowing began to test the Virginia Tech defense. Finally 13 minutes in the Bonnies defense forced a holding-on penalty, Keelin Coyle tapped (rather than kicking for touch) and sent it wide where center Greg Steffens scored in the corner.

Ten minutes later St. Bonaventure got a penalty, took the lineout, and the forwards surged on with prop Juan Penn doing the honors. The conversion was good for a 12-3 lead.

Still Virginia Tech hung in there. It wasn't until about 29 minutes that a nifty Bonnies backline move set up wing Ultan Horrigan, who sold a dummy and raced into the corner. With the conversion the lead was now 19-3. Virginia Tech hung on doggedly, but struggled to get the ball out of their half. As halftime loomed a turnover inside the VT half saw the St. Bonaventure forwards charge through—prop Than Doumbe controlled a pass that was slightly behind him and thundered over.

That made it 26-3 at halftime and you knew the constant defending would take its toll on Virginia Tech. Horrigan cut through just two minutes into the second half for his second try, and then fullback Matthew Joss scored on a brilliant run. After that things started to open up and in the final 30 minutes Bonnies scored 35 points.

Notre Dame College scored early in this one but then spent a long period defending their tryline. That they did and once the Falcons got out of trouble they scored a try off a nice grubber through the middle. Down 10-0 Army went back to put the pressure on and scored out wide.

It remained close through the first half, but as the second half wore on, Army started to get a little bit more penetration. The Black Knights took the lead in the second half, working a backline move off a scrum before the forwards finally finished it off. A lineout and maul brought another try, but Notre Dame College answered off a lineout of their own and stayed in tough at 24-15. But three ate tries capped it off for the Black Knights 45-15.

With Penn State's Friday night win over Mount St. Mary's, here's how the standings look in the Rugby East.