All On The Line In College Rugby This Weekend

All On The Line In College Rugby This Weekend

Lindenwood's men had to work for it against CWU and then lost to Life. Iowa Central won't be easy either. Todd Lunow Photo.
03.26.2021 - Alex Goff 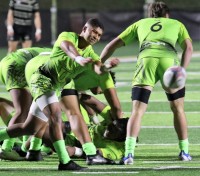 The hoped-for college rugby games for this weekend is a much longer list than the actual games.

Cancelations both last-minute and de-facto have gone on, and that leaves us with a small number of games, but games that still matter.

This is the last weekend of games before D1 Elite starts its playoff run. Lindenwood remains atop the rankings and the standings and will defend their position at BYU. Lindenwood last played the Cougars in the fall of 2019, coming away 63-0 winners. That is the only 15s game these two teams have played. BYU, meanwhile, sits 0-2 after competitive losses two Central Washington.

Lindenwood vs BYU will be shown live on FTF at ftfnext.com (KO 10AM Mountain Time Saturday) or on the FTF app.

As for Central, they take on Life University with Life looking for their first win having lost twice to Lindenwood. Life did beat the Orlando women's club last week in a non-college game with Autumn Locicero scoring two tries in a 52-17 rout. This was a good opportunity for Life to piece some things together, and they take on the Wildcats with, perhaps, a renewed confidence.

Those Wildcats were beaten by Lindenwood last week 62-12. As Head Coach Trevor Richards said of the game: "At the end of the day, everyone needs to get hit in the mouth at some point and this was an important wake up call for our team."

These four teams will meet in the playoffs starting April 10, and really it's just a question of who plays who. If Life wins against CWU, then we're probably looking at this weekend's games as previews for the semis.

(We include Penn State in these standings because Penn State is in the D1 Elite, but while they scheduled games, COVID restrictions and ramifications meant they were unable to play)

The formidable Lindenwood team takes on Iowa Central CC in a crossover clash. Lindenwood will likely run out a younger squad than they have in a while,

Arkansas State and Davenport play in a Mid-South conference game which will be shown live on Davenport's streaming service, Kickoff is 12:50PM Eastern Time on Saturday. Link here>>.

Both Davenport and ASU have shown flashes, and both have cruelly had games called off (COVID, weather). In the end Davenport hasn't played a Mid-South game yet, and ASU has played, and lost, two (both to Lindenwood). We don't really know where they fit ... until this weekend (we hope).

Life, like Lindenwood, will go across divisions and take on Queens University Charlotte. Queens has had several games on their schedule but they've all been canceled due to COVID issues. The players, said Head Coach Frank McKinney, are itching to play and are ready. Life has had games called off too and will want to get some game time for some of their younger players. It will be a good test for a Queens team that has moved up a division this year.

The good news is everyone passed their COVID tests and the game will go on. It will be seen live on FloRugby at 1PM Eastern Time. The other good news is that college rugby in the Western USA is slowly coming back. We may see more teams on the field before the spring is out. As it is, Arizona takes on Central Washington in Ellensburg, Wash. this weekend.

CWU lost a competitive game against Lindenwood and tied BYU, while Arizona won impressively over Grand Canyon to open their season.

"Jon, George, and Ryan were dangerous last week, allowing us to rest another weapon that we're excited to have back for a tough test" said Arizona Director of Rugby Sean Duffy. Duffy was talking about his deep three of Jon Rogers, George Niethammer, and Ryan Thompson, and that weapon he refers to is Kyle Fulton, who starts at outside center against a very good Jack Wendling for CWU.

Freshman EJ Freeman (Player Spotlight: EJ Freeman, Sedbergh To Arizona) impressed in his debut for Arizona and he's back at openside flanker.

Central, meanwhile, has enjoyed some very good work from their back row, but will want to fix their kick reply, which let them down against BYU and helped open the door for the Cougars to storm back for a 27-27 tie. It's been about 13 months since these two teams met in what was a 32-28 CWU victory. Every time these two teams meet, whether in 15s or 7s, it's a close one.

The game will be shown live on FTF at ftfnext.com (KO Noon Pacific Time Saturday) or on the FTF app.