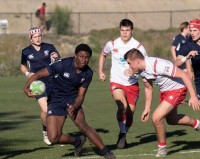 This week's Player Spotlight looks at a player who isn't even out of high school but has seen the world.

Freeman's parents grew up in Liberia and married in America—they had known each other in high school but didn't actually become a couple until they met again in the United States. That's only part of the much-traveled family's story. Freeman's mother, Berline, had spent time in Germany as an exchange student in school and really liked it there—so much so that she stayed there to attend university. When Freeman's parents divorced, she, EJ, and his sister Safi moved back there. Safi is now a college student in the USA, Berline is an MD in Frankfurt.

The move was tough on Freeman to start with.

"It was different, and I didn't know German; I was playing football in America and it wasn't really all that serious in Germany," he told Goff Rugby Report.

Going to the international school in Frankfurt, Freeman spoke English half the day and German half the day. He picked it up quickly. Encourage by his mother, he looked for a sport to play to help him assimilate, and he found rugby.

"We have a really good club here and I had two coaches who were from New Zealand, and had played at a high level, and I really enjoyed it," he said. Playing in the age grades for SC Frankfurt 1880, one of the most established and successful clubs in Germany, Freeman blossomed. A quick, powerful runner and tenacious tackler he played outside center most of the time. Soon he was playing for Germany's age-grade teams, and also mixing in some summer time in the DC area plying with the Maryland Exiles.

"We played against Bath and Poland, and that was pretty cool," he said. "Then I went to Russia to play in the European Championships. We played against Romania and Georgia—that was, like, eye-opening for me. Those guys were huge, especially Romania. I saw that I wanted to compete at that level."

So Freeman pitched an idea to his mother—school in England, a school where he'd receive a good education and also play serious rugby. He did his research and chose Sedbergh School out in the wilds of Cumbria in jammed between the Yorkshire Dales and the Lake District. Remote? Yes. But it was what he wanted. A good student, and now conversant in two languages, Freeman was accepted.

He showed up to Sedbergh as a center, and was quickly moved to flanker. Sedbergh had plenty of players who could pass and catch and read the game in open field. What they wanted was a marauder in the back row.

"It was an adjustment for me," said Freeman, still all smiles. "Jackaling was something I could sort of do but I really needed to work on that. Rucking and understanding what I needed to do there was new, but I learned."

And he could tackle, and he could run, and he made the 1st XV. A multi-skilled player, and, at 5-11 (maybe now 6-0) and 183, he was powerful, too. Sedbergh's 7s team was also highly-respected, and was thought to be a favorite for this year's Rosslyn Park 7s before the COVID-19 outbreak shut it down. Freeman made that team, too, an accomplishment in itself. And he also made the 7s team for Germany, and played with the Maryland Exiles in the USA during the summer.

During all of that, he caught the eye of USA Rugby's HS All American (now U18) Head Coach Brendan Keane. Keane tried to get Freeman to the U18 assembly last summer, but the scheduling didn't work out. But the scheduling did work out for the Winter Camp Can-Am Series. Freeman came off the bench for the first game (Canada and the USA played four split-squad games, which they tied). In the second, he started at the wing, and was superb, scoring two tries to spark a comeback in a 27-22 victory that secured a tie in the series.

See the gifs above. The first is when Freeman rescued a pass behind him and took what could have been a disastrous situation into forward momentum for the USA. The second one is his first try, finishing off a movement on the wing. The third is started by Freeman with a run, and he then alertly picks up the loose ball to finish it off.

"We were trying to get him last summer based on what we saw him do on film," said Keane. "He's an intriguing combination of speed and power and got some really good skills. But the thing with a player is always, how will he respond when he comes into camp, and he knows he's good, but he doesn't start right away. Most of them handle it well, and EJ handled it really well. You couldn't ask for a better attitude. He's traveled around a bit and you can see the maturity in him. His willingness to work and help the team was huge, and the different he made for the team in that second game was special."

Eager to push for higher-level play, Freeman will join the Arizona Wildcats this fall. He will probably move from flanker back to the outside backs, but his experience as a forward will stand him in very good stead, especially in 7s.

Seems like he's the type of athlete who achieves what he sits his sights on.