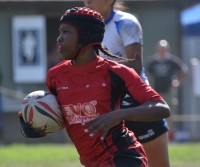 A team made up of graduates from the ICEF youth program won the second Southern California qualifier for the Women’s Club 7s National Championships this past weekend in Santa Barbara.

In that game, the Surfers won on a late try in a tight game. The Surfers, however, had already qualified for Nationals, and so ICEF OGs earned the second qualifier position.

ICEF is an educational program that operates schools in low-income neighborhoods in Los Angeles. Under Stu Krohn and David Hughes, the ICEF program runs boys and girls single-school rugby programs (namely View Park HS), and a HS club (under the ICEF name).

The program tours frequently overseas, and also works to place players in top colleges around the country.

The ICEF Old Girls team features players now at a variety of colleges, but the tea is still young - an average age of 19.

They will now go to Seattle for the Club 7s Championships August 9-10.