Wilson and Saint Anthony's players pose together after the game.
01.11.2020 - Alex Goff 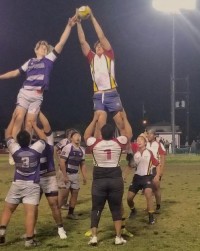 In something of a barnburner in Southern California high school action, Wilson High School held off a determined and very skilled Saint Anthony's HS 32-22 Friday night.

Wilson ran out to a 17-0 lead through the first part of the opening half. But Saint Anthony’s rebounded nicely and scored twice to make it 17-12 at halftime.

In the second half it was much the same story, as Wilson scored twice to lead 25-12 only to see Saint Anthony’s come back to make it 25-22.

Late in the second half, Wilson worked their way down the first to get one more try to make it 32-22. Wilson held on from there.

All of that doesn’t do the game justice. Despite it being early in the second, both teams showed excellent skill and worked hard. Many young players on both sides stepped up to defend bravely and kept up the intensity through the entire game.

Wilson Head Coach Tony Balsuriya said he found himself watching as a fan.

“It was one of the best game I have seen,” said Balasuriya. “Saint Anthony’s is a very good team, very well coached. They are very young but they gave us a huge battle. My boys kept their cool and kepy their composure during a relentless attack.”

Saint Anthony’s league games will likely all end up in forfeits because the team doesn’t have a high-enough percentage of players from only one school to qualify to be eligible in the SoCal Varsity White. But that doesn’t mean they don’t know what they’re doing, and this result, while good for Wilson, also showed that the young Saint Anthony’s team is a team to watch.

Both teams huddled up after the game and congratulated each other on a well-played game. They know also that many of them will be club teammates in a few weeks.