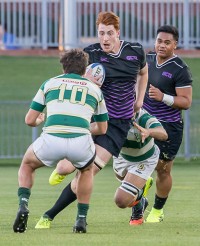 USA Rugby’s behind-the-scenes efforts to adjust residency rules aren’t just about complaining about what happened before; they have a direct influence over the near future.

Prompted in part by the Wes White Fiasco, USA Rugby is pushing World Rugby to rethink how it judges whether a player is a resident or not.

White cam to the United States to play rugby at Lindenwood. As we outlined in a previous article on World Rugby’s willful ignorance of American ways, White studied and played at Lindenwood, while his father, former Springbok Head Coach Jake White, paid the bills.

This is not unusual for college students, and certainly when a player is in a daily training environment such as Lindenwood, if the player can avoid taking a job to balance his studies and his athletics, you’d think he’d choose to do that.

White went on to be a star and leader for Lindenwood and was in the USA system with the Collegiate All Americans. But just as White was expecting to become USA eligible thanks to his time (including summers) in the States, World Rugby said no. Because Jake White had paid for many of Wes White’s tuition and living expenses, that didn’t count as being a resident. White was left without an option, and moved to England where an ancestral qualification for England was waiting for him.

This struck many in USA Rugby as completely missing the point of how demanding top-level college sports are in the USA. Which was one of the points of our earlier article.

USA Rugby’s demand now is that there be no “secret answer C” in checking the boxes on residency. If a student-athlete comes to the United States and he or she isn’t paying tuition, a family member is, what does it matter?

World Rugby’s guidelines to Regulation 8 talk about students, but in the case of White (and probably several other American collegiate student-athletes who want to remain in the *S), they twisted the purpose of the guideline.

19. What is the position of students?

As far as students are concerned, particularly those that are not financially independent, being resident, as a full-time student, in another country, is likely to be considered as a series of temporary absences from the parental home. It is anticipated that in the majority of cases involving students the parental home is likely to continue to constitute the student’s permanent and primary home. Accordingly, attendance at college/university in such circumstances is unlikely to break a Player’s consecutive period of Residence. However, as in all matters of eligibility, the overriding concern of the Regulations Committee in assessing any such case will be to ensure that there remains a close, credible and established link with the country in which the Player claims to have retained his primary and permanent home. There could be circumstances in which a student living in another country may be deemed to have interrupted his Residency period.

World Rugby twisted this around to also mean, if you’re in college in Country B, and you don’t also have a job, you aren’t establishing residency.

This is not what the guideline appears to address, but is not what USA Rugby needs to change.

(Meanwhile, Lindenwood University Rugby is advising players to have their parents send money to the students and then have the students pay the tuition, thus making it less obvious that a parent is paying the bills.)

Wes White, despite a considerable investment by American rugby, will not be an Eagle. But other players, top MLR prospect Cam Dodson for example, could be. USA Rugby is fighting for players such as Dodson, Matt Gordon, and future prospects who could be USA 15s players if their time in college counts toward their residency.

The argument for this is simple: Playing serious college sports is a heavily time-consuming avocation; players are investing their time and effort into this, and just as a player poorly-paid at an pro team Academy elsewhere in the world might need some financial help from home, so do these players.

These are full-time student-athletes. Many are actually prohibited from working an additional job (this is something else World Rugby people do not know) and universities have strict rules about preserving amateur status.

(Elsewhere in the world, no one cares about a collegiate rugby player crossing over the amateur/professional line.)

These students have minimum course-load requirements (also a surprise to World Rugby), and can’t just get away with taking one course in order to be eligible for the rugby team.

All of these things need to be spelled out to what remains a very close-minded and arrogant World Rugby executive to show that playing major college rugby in the USA isn’t just a vacation; isn’t just a “temporary absence from the parental home,” but a serious life choice, and should be judged as such.