This kick from the touchline went over for Kelter. Photo Saracens Rugby.
02.09.2022 - Alex Goff

Alev Kelter, a week after scoring a try in her debut for Saracens, was player of the game in her team's 22-8 defeat of Harlequins.

Not to be outdone, USA skipper Katy Zackary was also player of the game in her match, capping off a 36-32 win over Gloucester-Hartpury with a 60-meter eightman pick for a try. She actually scored three but that first jaunt got her Try of the Week.

And Jennine Detiveaux started on the wing. Megan Foster was on the bench as backline relief. And that's not even the entire US contingent on the Chiefs, as Gabby Cantorna is also a Chief, but is injured.

All-time great Alycia Washington is with the Worcester Warriors and she started at lock, got a yellow card, and battled on in a close loss to Bristol. Kristine Sommer was at blindside flanker in Gloucester-Hartpury's loss to Exeter, with Maya Learned starting at prop. Nick James started for Sale in their win over Loughborough. She also served as the vice captain. Katana Howard started at flyhalf, while Catie Benson was on the bench.

Across the scrum from James was Charli Jacoby propping for Loughborough and Bulou Mataitoga offering some exciting looks at outside center. She didn't score this past week, but she scored the week before. 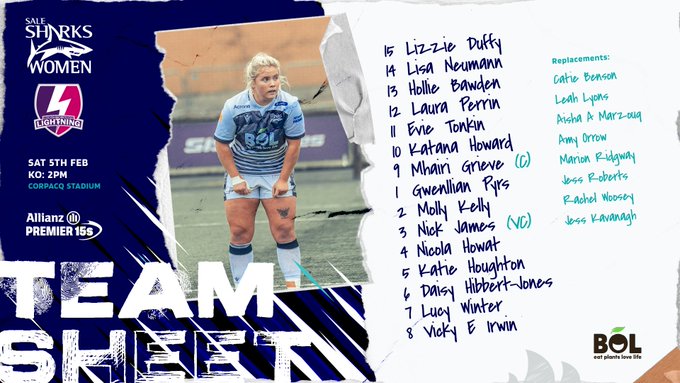 Even though the Eagle women didn't have an especially successful 2021, you can't fault the commitment of the players to get better. For the vast majority, of not all, of these players, they can't be paid for their play in the Premier 15s. They get housing and food and transportation, but many are holding down jobs remotely or working on their studies remotely. They are doing double-duty, in a strange land, to get better. (Correction - this may have been the case earlier, but it's changing and players are now being paid-AG)

And they are taking on major roles. Washington of course is a leader wherever she plays. Most of these players are starting. Rogers joined Exeter late and was starting within a short time. Kelter, after joining Saracens just a few weeks ago, has taken over the goalkicking duties. And as we mentioned, Zackary and James have captaincy roles.