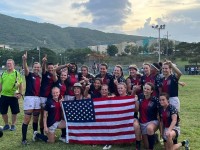 The USA South Panthers program won both brackets in the Rugby Americas North over the weekend.

The Women's 12-a-side competition saw the South take care of every opponent despite often giving up size and power to their opposition.

Playing a faster, more fitness-oriented game, the South edged St. Lucia 8-5 in their opener and built form there. They shut out Cayman Islands 29-0 and then defeated Trinidad & Tobago to make the final.

There the Panthers faced a very athletic and accomplished Jamaican side that had scored more than 40 in two of their three games.

Jamaica had a nice combination of powerful inside runners and pace outside. Shanae Gordon was a sparkplug, testing defenses with quick taps and her acceleration before setting up her power runners in support.

The final was dramatic. The South scored first with a quick tap from scrumhalf Regina Durkan allowing her to send a flat pass to Cyndi Campbell, who was not to be denied.

Defensive pressure led to the next South try, with Durkan stealing the ball in the ruck and laying off to Keki Jordan who crashed over. Jamaica replied with a big tackle to force a turnover and Naoni Dodd was gone around the edge. A brilliant conversion from a tough angle from Shanique Smith made it 12-7. In the second half, a blistering run from Stacia Thompson extended the USA South lead, with Campbell's excellent conversion, to 17-7. Jamaica then scored late through Dodd once more to make it 17-14. But there wasn't enough time to reel in the Panthers.

For USA South, Campbell was MVP of the tournament. T. Fletcher (also Head Coach at AIC), was an excellent field general throughout, and the overall team fitness saw them through.

The USA South U19 men saved perhaps the best for last in their final against Jamaica. The jitters and little mistakes were gone and they executed well. Led by an MVP performance from No. 8 Luis Cruzado the Panthers hammered Jamaica 56-10.

8 man Luis Cruzado has been unstoppable for @usarugbysouth the whole week, including the Championship Final right now against @Jamaica_Rugby pic.twitter.com/7FDJVwRiGI

The weather wasn't always the easiest to deal with in Kingston, Jamaica, over the week and that played a little bit into the South's hands. The Panthers won many of their games because their forwards were powerful enough to bash it over from close range. That's not saying they weren't adventurous but instead just pointing out a fact—the USA South pack had a massive influence on this tournament.

It was just that sort of try that got the South through this game. Lindenwood front-rower Hailama Anakalea bulled over for the first try, and Okapi Wanderer Cruzado scored on an eightman pick to follow up.  Hooker Charies Taylor out of the Greer 76ers scored from close range, Charlotte Cardinal Jason Trevino finally got the backs in on the action—Trevino has had a very good spring for club and country.

Jamaica tried to use their boot and their speed to catch the South napping, and they managed to score doing that to garner some consolation.

Nathan Williams, Anakalea, Taylor, and Gozi Mosi all got in on the scoring action.

But the impressive thing was how they improved through the week and produced a really strong, dominant performance in the final. By adjusting their tactics to fit the conditions, whether they were wind or rain, the USA South found success.

Mexico, which had started poorly the tournament with a surprise loss, rebounded to take 3rd. In the end, strangely, that first game was their only loss and the last game, a 34-0 shutout of Bermuda, was their only win. They tied the other three games. Cayman Islands took 5th 15-5 over Trinidad & Tobago.