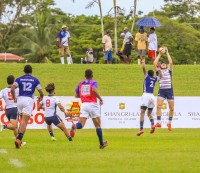 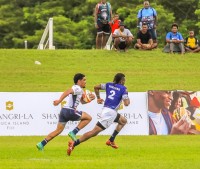 The USA Falcons men's team is meeting up with some difficult competition at the Coral Coast Sevens in Fiji.

Returning to some much-needed development tournaments (as advocated by GRR here>>), this young Falcons team is playing in Fiji where the consensus is that six ro seven of the teams in action could succeed just fine on the Sevens World Series circuit. Fiji's astounding depth in 7s is on display here, and teams that have to travel the 6,000 miles or so will find out that it is no picnic.

Teams such as the Fijian Army, a team of corrections officers, the police, the fire department, and some other groups are in this 16-team men's competition. The Falcons are the only non-Fijian side playing.

And the Americans started well, opening the weekend with a 33-7 victory over Nukuvura.

But the next game was a little tougher as Coach Ben Pinkelman's Falcons were downed 24-12 by the Army. Noah Brown and Donovan Law again scored.

That set up a key game to finish off pool play. Both the Falcons and Fire were 1-1, both having lost a close one to the Army. A win would put them in the Top 2 in the pool and into the Cup Quarterfinals.

And it was Fire that held off the Falcons 17-7, with Kahunu Koi getting the lone Falcons try.

That means that the Falcons will be in the consolation quarterfinals, likely against Tuva, which lost two close games in Pool B and also lost a game by default (we're not sure why).

Also-fun fact, the only two red cards in the men's competition went to the Police and the Wardens (corrections officers).

Pinkelman, who sat down with GRR Editor Alex Goff for a RuggaMatrix America podcast interview just this past week, said playing challenging tournaments like this one is jugely important.

"The goal is for these guys to continue to push forward and build cohesion on and off the field while they learn to make themselves into a team that earns the world's respect when they are the regular representatives of the USA Sevens," said Pinkelman before the tournament. "A couple have had a really strong start to that journey, and I hope are able to push their way into Paris2024.”