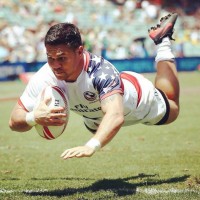 The University of Utah has added two former Eagles and Utes alumni to their coaching staff as the program looks to climb back to the level it enjoyed 10 to 15 years ago.

Utah was a D1A semifinalist in 2011, the same year the Utes won the inaugural CRC 7s. They were D1 college semifinalists in 2006 and finalists in 2005 and 2002. But all of that was quite a long time ago. Some key graduations coincided with several coaching changes, and a resulting interruption in recruiting. But last year Adam Griffee took over as Head Coach. He took over just in time to see all club sports shut down due to COVID. Some students, however, were able to play rugby as a club unaffiliated with the University, and that, coupled with a spring training period, has set Utah up for a fall season this coming academic year.

Meanwhile, Griffee has brought in former USA prop Mate Moeakiola and former USA 7s halfback Don Pati. Both played for Utah in college. Moeakiola will be the team's forwards coach and will help with attack and defense, while Pati will be in charge of 7s development.

He returned to Utah after retiring from playing and most recently was part of the coaching staff that led Herriman HS to a national single-school championship.

Pati is perhaps most well-knowing in University of Utah parts for scoring the winning try in overtime in the CRC final in 2011, the try that defeated Cal in the first of those tournaments. Born in Western Samoa, Pati grew up in the USA and played for Highland HS, helping them to a national championships. At Utah he was a four-time All American and was later called up to the USA 7s team and played in 19 World Series games for that team. He played for the Utah Warriors in MLR and continued to shine as a 7s player domestically, winning the Club 7s MVP in 2017, for example.

His roots at Utah are deep and his understanding of attacking play—he played scrumhalf, flyhalf, and center at a high level— coupled with his experience in 7s, will be an asset to the Utah program.

"I really wanted to boost my coaching staff," said Griffee. "I am excited to announce two former Alumni joining our coaching staff. They both have strong connections with USA Rugby and have played at a very high level. "

Utah will enter a team in the NAI 7s Men's U23 bracket this month, and that will kick off a fall which will be centered around playing 7s and development 15s. The meat of the 15s season will be in the spring.