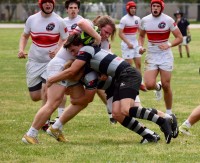 The Tennessee Rugby Association will hold the state rugby championship tournament finals on Saturday, May 12 after the first round of playoffs held May 5..

Harpeth is playing in its third consecutive state title game after taking care of the South Doyle/Tribe team.

Harpeth struck early wing Tanner Harnage putting it on his boot deep in H2’s territory. Scrumhalf Garrett Peal would get the bounce near midfield and race in under the posts. Wing Cormac Brennan converted to make it 7-0.

South Doyle/Tribe answered eight minutes later, taking advantage of a penalty close in under the posts, with conversion. 7-7

But Harpeth would start to pull away. Peal fed prop Kyle Means from a penalty tap and Means ran through loads of traffic to set the ball down. Three minutes later, a Harpeth lineout would send the ball to flyhalf Avery Tate, who sent flanker Peyton Arnold through on a crash ball move. Arnold rambled about 40 meters and then after strong carries from lock Eli Christoph, and prop and captain Jake Ellison, lock John Taylor powered over. That made it 19-7.

About 23 minutes in, South Doyle/Tribe took advantage once again of an H2 penalty to tap quickly and score to make it 19-14. Emotions began to run hot, and while referee Chris Gower did well to keep things relatively calm, words were said eventually Gower ejected the South Doyle/Tribe coach, and red-carded a player. Up a player for the rest of the game, Harpeth slotted a penalty from Peal to take a 22-14 lead.

In the second half, Harpeth exploded for five tries, with center David Ebert intercepting a pass, some nice interplay with forwards and backs setting up center Christian Moolman, and No, 8 Jonah Albert capping off a turnover for the first three.

Flanker Dominic Roberts scored right off the restart, beating several tacklers to do so, and then a Moolman pitch (he was doing that all day),  fullback Griffin Peal raced in to make it 53-19.

Two more tries finished off the game as Andrew Dodson and Moolman scored.

With Germantown [Memphis] beating Ravenwood earlier in the day, TN will see a middle/west TN final on Saturday, May 12, at MTSU Rugby Facility. These teams have not seen one another for a few years.

The West Boys Tennessee Cup semi-final at USA Stadium Millington,TN pitted 2 long time Tennessee Rugby rivals Germantown #1 out of the West and Raptors #2 out of Middle TN.  These teams were very familiar with each other, some of the seniors playing each other since middle school and joining together on TN Tristars in the Regional Cup and Las Vegas Invitational tournaments under USA South and TN Tristar Director Mark Williams. This was a rematch of the 2016 state cup semi-final that Germantown dropped by 15 that had Germantown hungry for a win.

The playoff seasoned Raptors won the opening kickoff deep in Germantown territory and were awarded a not releasing penalty inside the 22 meter.  Strong possession and 8 phases later Raptors drew first blood and scored a wide try.  Raptor scrumhalf slotted a brilliant conversion from the far sideline and went up 7-0.

With nerves settled, Germantown hooker and junior captain Ryan Bullock an EIRA camp and USA South LVI player put the next 2 scores on the board for the Mustangs.  First a quick tap inside the 10 meter line followed some hard running 5 meters out after a 60 meter penalty clearance.  Both conversion kicks were slotted by his fellow USA South teammate and US Youth Olympic 7s Rugby invitee junior scrumhalf Max Pleban.

After a missed penalty kick from 40 meters out, Germantown received the 22 meter drop kick and drove 35 meters and scored in the corner after 7 phases with junior USA South LVI fullback Lincoln Pare.

The Raptors show poised with smart forward play towards the end of the half and set up a strong pick & go score wide by a hard running #5.  Halftime score Germantown up 19-12.

Strong tackling and rucking from the Raptors kept Germantown forwards at bay. Followed by a held up try and a dominant scrum saw Raptors win a penalty to clear the ball beyond the 22.  Miscommunication in the Raptor lineout resulted in the ball going astray and Germantown picked up the scraps and popped out to junior flyhalf Finlay Bolan who scored after a nice dummy keeper.

Raptors put a deep kickoff to the Germantown fullback who burst through the seem breaking 3 tackles and ran 80 meters for a score putting Germantown up 31-12.

A well worked kickoff and some dominance in the lineouts by the Raptors ensued before they gathered a yellow card penalty with a high tackle that left them up a man.  Strong forward play turned the Germantown penalty into points with a converted try.

Back and forth backline attacks were on show and Germantown junior inside center Chris Colebank eventually chased down a clearance kick for a 70 meter score under center post.

Raptors feeling the pressure again responded with more forward play and scored after 2 phases on another pick & go off a penalty but missed the conversion.

Germantown put the kickoff deep hoping to give the Raptors a long field.  Change of possession saw Germantown substitute sophomore prop pick & go but came up short 1 meter with an unfortunate knock on.  However after a blocked Raptor clearance kick off a 5 meter scrum junior scrumhalf Max Pleban dotted down the ball and scored a try and made the conversion for his 13th point of the game.

The Raptors had the final run of play finished the game on a well worked try by their replacement winger scoring in the corner for the last points of the day.  Germantown took the victory 43-24 and earned their first cup final.

Said Kevin Roedel Germantown head coach; "We knew this was going to be a battle, some of these kids have played against each other for 6 years. We have great respect for Richard Boone's Raptors program and used that as a model to build out our middle school, high school girls and boys programs."  "This year's senior class was the first to bring a middle school state championship to Memphis and they hope to close out their high school careers doing the same in the boys cup final."

"I think Tennessee Rugby often flies under the national radar; thanks to the TN Tristars and USA South programs players from both sides have had an opportunity to compete in the Regional Cup Tournaments since 8th grade, travel to the LVI and play in the RAN International 15's.  Today the fans got to see smart physical Rugby by some very seasoned players."