Tempe Pulls Away From Red Mountain to Win Arizona Final

Tempe Pulls Away From Red Mountain to Win Arizona Final 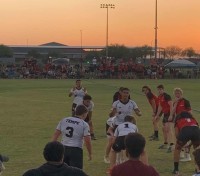 Despite the final score the game was actually very tight for most of the time. Red Mountain and Tempe are old rivals, and this game brought with it the physicality characteristic of such a rivalry game. Tempe worked their way close to the Red Mountain line, but penalties hurt them early and Red Mountain was able to get out of trouble.

With some good kicking from hand Red Mountain turned the field position around, took three points from a penalty goal, and then added a try to lead 10-0.

Tempe didn’t seem to fazed by that and started to claw its way back into the game. Luke Schaffer picked up a loose ball from a lineout and rumbled 20 meters for a try.

Then Tau Pauga found a gap and cruised through for 75 meters before finding wing Nate Leff in support for what seemed like a crucial try.

With flanker Diego Echevarría laying in the hits and with prop Luke Schaffer and No. 8 Puka Kupu punishing defenders with ball in hand, Tempe started to get some momentum.

They used their kicking game, too, and with a good kick chase Tempe was, for the most part, able to pin Red Mountain in their end.

Then the Tempe defense came into play and forced turnovers. As the game wore on the space opened up a litle more and Tempe’s forwards created holes that the backs exploited.

Scrumhalf Aki Pulu, who had a very strong game, fullback Ashton Liddell, who handled Red Mountains kicks nicely, wings Alejandro Echevarría and Orion Kupu, and No. 8 Puka Kupu all ran in tries late to turn a nailbiter into a rout.

“We have been trying to play a variety of competition and we’ve done well,” said Tempe Assistant Coach Charlie McGarvie, whose team beat the SOC Raptors out of Southern California but lost a close one to the San Diego Mustangs when they were hit somewhat by injuries. “But Red Mountain is always a big game for us. We knew we had to play well in this game to set us up for Nationals.”