Summit, Monarch Meet to See Who Rules in Colorado

Summit, Monarch Meet to See Who Rules in Colorado 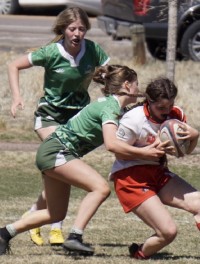 The first season of CIRA Girls Rugby season enters a crucial weekend as the top two teams in the competition will meet for a series of three 7s games.

The Colorado Interscholastic Rugby Association is a new league for both boys teams and girls teams, with a competition set around following state interscholastic athletics standards. This year, of course, the league has had to work around COVID delays and smaller competition windows. Regardless, the cream has risen to the top, with Summit and Monarch high schools sporting identical records.

Both teams have won all four of the series they've played, winning 11 games and losing just one. Both losses came in the team's first series of the season.

"We like the league," enthused Karl Barth, Summit's longtime Head Coach. "The teams had talked about the idea for a while and this was, it turned out, the best year and the worst year to do it."

What he meant bu that was this is a very difficult year to play any sports, but the changing nature of 2020-2021 means that you can try new things without making a permanent first impression.

"The league has a huge opportunity for growth," he said. "As for the level of competition, obviously a couple of the top teams aren't playing this year but they will be back and we've got Valor Christian coming in next year. We had a season, and the level is good. East is massively improved. Regis is competitive and has got some good young athletes. And Monarch is good but we haven't played them yet, which is kind of cool."

In a normal year in Girls HS 7s, teams would all have played each other multiple times in a series of tournament formats. It doesn't work out that way this time, because of COVID restrictions, teams only play one other opponent each week—they play three games on the day.

"It's an interesting format," said Barth. "And you find out how hard it is to beat someone three times, because they're making adjustments and you maybe aren't because you're winning. With Monarch, the last time we saw them was last year’s state final. They are always well-coached and really athletic. They're aggressive, good tacklers, and we're looking forward to it. It’s not like we know what they’re going to do; there’s a whole lot of 'will they be different?'"

"I feel really good  about how we're playing," said Monarch Head Coach Rick Gurmendi. "As a team they've come together really well. We lost our MVP from last season to a knee injury and the girls just have come through."

That would be Violet Davis, who is still out. But Monarch has seen some impressive performances from other players. Freshman Lydia Szabo bas a powerful engine, can make plays, and is scoring tries. Marley Gurmendi is a smart scrumhalf with a ton of rugby IQ. Kate Muldoon has been impressive throughout the field and Belle Robinson brings power and aggression to the game. Almost all of these players have come up through the Superior Eagles youth program.

"To have players come in as freshmen who understand the game and know the basics is really valuable," said Gurmendi.

Looking ahead to Summit, Gurmendi said "it's kind of exciting to have this series when both teams have the same record. I know Summit will be well-coached and they are so good in all aspects."

"They've adjusted really well," he said. "I can’t compliment our players enough for embracing everything, including the virtues of rugby we all extol. it’s important to be together and get out there and play and support each other, and they've really embraced it and worked hard. We don't really have superstars; they just play for each other and play the roles they want to play. It's a really balanced team and it’s been a lot of."