The Story of How Loyola Got to the National D2 Semis

The Story of How Loyola Got to the National D2 Semis 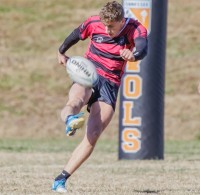 Loyola of Chicago entered the 2022 fall season with all sorts of questions.

On the search for a new Head Coach after Lance Houia moved to work with MTSU, and short players, there were real questions about the competitiveness of a team that had made the national playoffs as recently as 2019.

“There were only six of us who were in the Round of 16 in 2019, which was our first time ever,” said Filippo Chiaramondia. “And last year we still had that goal to go back, but COVID.”

As has been outlined in these pages, different regions of the country reacted to the COVID pandemic differently. Some were much slower to come out of restrictions than others, and Chicago was one of the slow areas. So while fall 2020 was a bust for them, 2021 wasn’t much easier. Recruiting was very difficult, and really 2022 was their first full season back.

But they were very low on numbers, and had lost their coach.

“We were like, ‘OK what are we going to do?’” said Chiaramondia. “How do we structure our team or our practices? How do we grow numbers?”

Control What You Can Control

So they got to work. They drew in the alumni and looked for coaching help. Sal Carfagno came in along with others as coaches, but they also relied heavily on the senior player leadership group. They put out a table at every recruiting and activities opportunity.

“I’m a grad student,” said Carfagno. “I am not necessarily a great technical coach, but what I can do is build teams. So we talked about and decided to control what we can control. Go to activities fairs, talk about what it’s like to be on this team, and just welcome everyone.”

Even so, Carfagno said he was nervous at the beginning of the season, when they barely had 15 players at practice and were staring down the business end of a season opener against Northern Iowa.

But slowly they brought in players. Some who had played at St. Louis U. High School, such as center Declan Heffernan, showed up; some athletes recruited from the student body showed up, such as flanker Tag Scanlon, showed up. Ben Payne started to show ability at scrumhalf and they started to build their depth.

“We got athletes and worked to build them into rugby players, but we only really had two weeks,” said Carfagno.

But it didn’t deter them. The older players knew that would probably be their toughest league game of the season.

“As we played each game we developed new stuff and developed,” said Alex Van Ness. “The key thing is our culture.  My experience with rugby has always been the older guys include the new guys. Because not as many people play the sport, anyone who wants to play you make them feel welcome and it’s like a family.”

“And we really we like a family,” added Van Ness. “The team hangs out all the time. We have practices and then film Wednesdays and we hang out afterward. The guys even do some study sessions together if they’re taking similar courses. The culture overall the chemistry is a big part of how we improved.”

The Charge to the Playoffs

And they did improve, with a shutout win over UIC, a close victory over an improving University of Chicago team, and then defeats of Illinois State and Northwestern—those last team played on a Friday and the following Sunday.

“That first game against Northern Iowa was the hardest task for us,” explained Chiaramondia. “We were down there and we’re like ‘let’s see what we’ve got.’ About 70% of the team had changed positions.

“But then we shut down UIC who had two Italian grad students and were really tough. Then Chicago had beaten Illinois State but we had great fan support.”

That two-game weekend was crucial for Loyola as it secured a place in the Great Midwest Conference playoffs. There they lost 36-0 to Marquette in the semis, but shrugged it off because they knew they only had to win one game, the 3rd-4th game against Whitewater, to make the national playoffs.

“We were shut down by Marquette,” said Carfagno. “But we came out of that game knowing we could improve just a few things and we would do a lot better. We needed to cut down on the penalties for sure, and we felt we could do some things with our kicking game. So we just focused on the next one. For me, as a coach, I don’t do much. When it comes to game time it’s up to the players and my work is done, so they needed to know how to adjust.”

“The Marquette defense was crazy; we were five times inside their 22 and they made turnovers,” said Chiaramondia. “Whitewater was a must-win so we gave it all we had. Winning that game told us we can beat anybody.”

After beating Whitewater to make the national playoffs, Loyola then shut down a very good Washington University side 68-0. The defense was coming together, and they were minimizing penalties and using the boot to pin teams back. And it was working.

They beat Auburn, a top-10 team, 49-15 before facing the Marquette side that had dominated them so recently. But this was a different Loyola side now.

“Against Auburn we kind of controlled the ball and beating them showed we weren’t a nobody team,” said Chiaramondia. “So against Marquette we were like “OK guys, this is it, let’s go up in their face and shut them down.’”

The defensive pressure did the job, and Marquette struggled more.

Carfagno urged his side to just play technically sound rugby and keep the penalties low, and with the kicking game firing they started to piece it together. Final score Marquette 21 … Loyola 28.

And now Loyola is in the final four in the D2 Championships, facing Principia in the semis December 9 in Houston.

“Principia is arguable the best team in D2,” said Van Ness. “But as long as we play as a team play together, we feel we can beat anybody. “

“It’s an honor for us,” added Chiaramondia. “We’re so excited. We know we will play one of the best teams in the nation, but we know that no matter who’s there we can score tries. We are literally a family. We work together. The alumni and everyone has shown us so much support. We’re the Loyola Rugby Family, and once you’re in you never go out.”