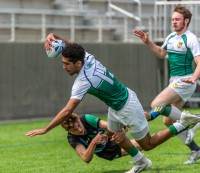 (Photos from the game courtesy of Guy Warren)

Meanwhile, in Illinois, Brother Rice edged Neuqua 36-33 to take the Rugby Illinois Boys D1 title.  Brother Rice ran out to a 24-7 lead just after halftime, and with 15 minutes to go still held onto a 19-point lead at 36-15. In the closing minutes, Neuqua stormed back and powered through to make it a three-point game. Neuqua had the ball at the end of the game and worked their way into Brother Rice territory. But the Rice defense held and forced a knock-on to end a dramatic game.

Neuqua will be left ruing yellow cards that made them shorthanded for far too much of the game.

Other results from Illinois:

In Rugby Ohio, in games that were shown live on FloRugby, Avon Lake came back from a 22-5 deficit to beat Toledo 24-22 in the Boys D2 final. A fast and hard-hitting Walnut Hills defeated St. Joseph's Academy 44-19 to win the D1 Girls final.

In New York, Pelham beat Syracuse 40-0 to make the final of D2, where they met Rye in the final. Rye defeated Grand Island 40-0 in the other semi. In a hugely physical game, both teams squandered scoring chances and changed ends with the score 7-3 for Pelham. In the end, Pelham was able to eventually wear Rye down and took the points when they were on offer, scoring three penalty goals and a converted try in the second half to win 23-10.