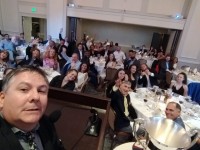 The MA Sorensen Award, sponsored by the Washington Athletic Club in Seattle, is heavily represented this week in the USA Women’s Stars & Stripes assembly.

Not only are four of the five winners active, they have key leadership roles as well.

The only Sorensen Award winner not in the assembly is the 2020 recipient, Spiff Sedrick, who is still in school.

In addition, Hawkins was the vice captain for the USA Stars, serving as the leader for the backs, and Henrich, who just recently turned 21, was the captain of the Stripes.

It’s a testament to the selection committee and the choices they have made for the Sorensen Award. Certainly USA Head Coach Rob Cain has seen something special in them, and is looking also to hand the leadership baton to newer players as he looks to bring in a new generation of talent.

What he has seen in these four players is what the Sorensen Award Committee saw—great talent coupled with character and leadership.

The MA Sorensen Award for the top women’s college rugby player in the country is named after trailblazing rugby player, coach, and doctor Maryanne Sorensen, who was part of the 1991 Women’s Rugby World Cup-winning USA team. Sorensen has been on hand to personally present the award that bears her name every year that it has been possible to hold an awards dinner (the COVID shutdown precluded the event from being held this year, but you can see the video ceremony below).