Sorensen and Scholz Awards Given Out at Gala Event

Sorensen and Scholz Awards Given Out at Gala Event

Saturday, June 11, the MA Sorensen and Rudy Scholz Awards were officially handed out to Idia Ihensekhien of Dartmouth and Larry Williams of West Point at a gala event at the Washington Athletic Club in Seattle.

The event also welcomed Richelle Stephens, who won the MA Sorensen Award in 2021 but, because of the COVID pandemic, did not get a dinner. Stephens spoke with MC Mike Gastineau about her experience and how she balanced motherhood, her studies, and playing at an elite level (hint, it involved her teammates competing to be a babysitter). 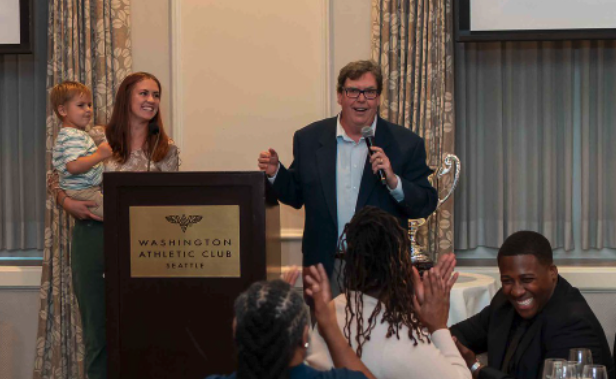 (What did Mike Gastineau say that made both Richelle Stephens and Larry Williams laugh? We don't remember. Photo John Bang for WAC.)

Also speaking were US Rugby Foundation President Brian Vizard, who spoke on how MA Sorensen is about to be inducted into the US Rugby Hall of Fame. Sorensen was there, of course, and spoke mostly about how props seem to pop up throughout key moments of the game. Sorensen herself was the nation's best tighthead prop for well over a decade, leading the USA to three World Cup finals. She pointed out that Ihensekhien, while a No. 8 now, used to be a prop, how Williams is a prop, and how, in fact, props are special. It was a touching and humorous speech—the type she is known for. We also heard from Dartmouth assistant coach and capped Eagle Stacy Bridges, who called Ihensekhien one of those players every coach wishes they had. 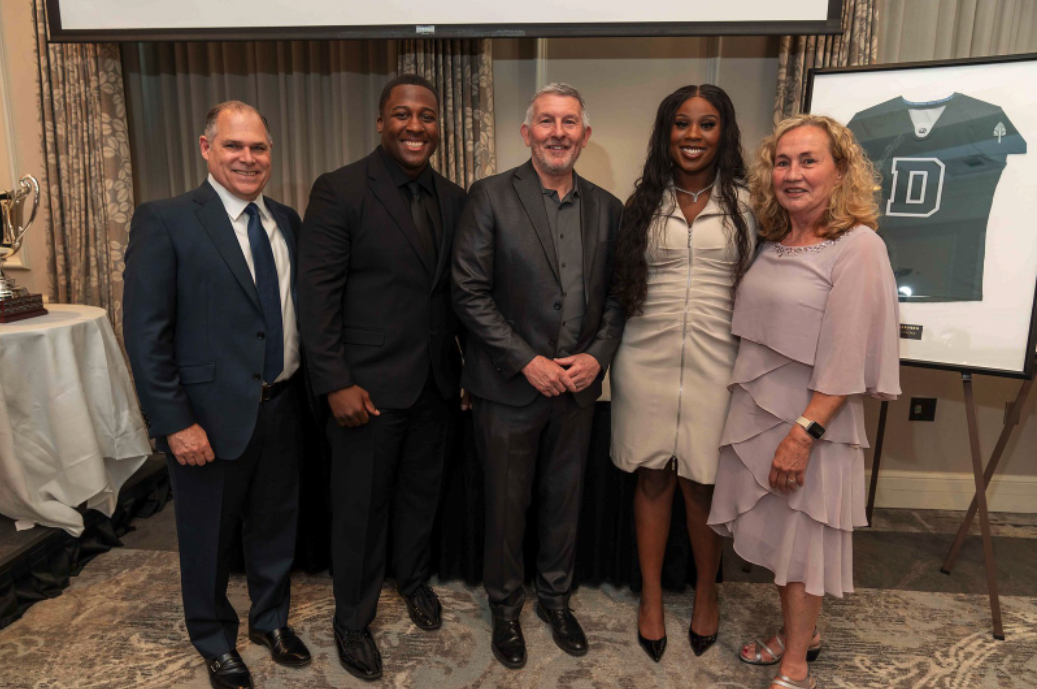 Doug Scholz spoke also. Doug is the grandson of Rudy Scholz, who lends his name to the award for the best men's collegiate player in the country. Doug had accompanied his father, Rudy's youngest son, Dave, to the awards dinners since 2016. Dave died about 11 months ago and is sadly missed. Doug Scholz remembered the influence both Rudy and Dave had on him and the Scholz family.

GRR Editor Alex Goff, who oversees the selection of the awards, spoke briefly about how the winners are chosen, and also pointed out how the award has been able to notch some firsts over the recent years—first player of Native American descent, first Polynesian winner, first African-American winner, and, he added, the first Canadian in Ihensekhien. Goff also pointed out that the first-ever Sorensen winner, Hope Rogers, had scored a try and been named player of the game in the USA's 16-14 win over Australia that evening. 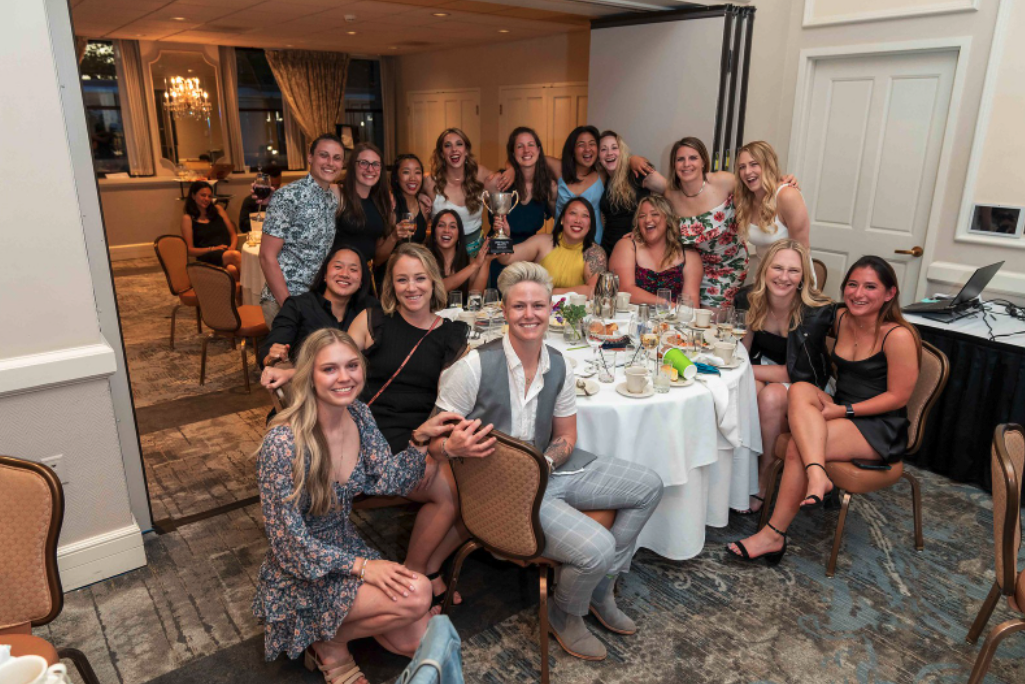 (The WAC-supported women's 7s team had won a tournament that day, and were dressed to the nines for the evening. Photo John Bang for WAC.)

Gastineau spoke with both award-winners, and both had some very similar things to say, namely that they thanks their mom's for the support and love, even when (as with Williams), their decisions made their mom's worry. All three awardees (including Stephens) attended with their mothers. 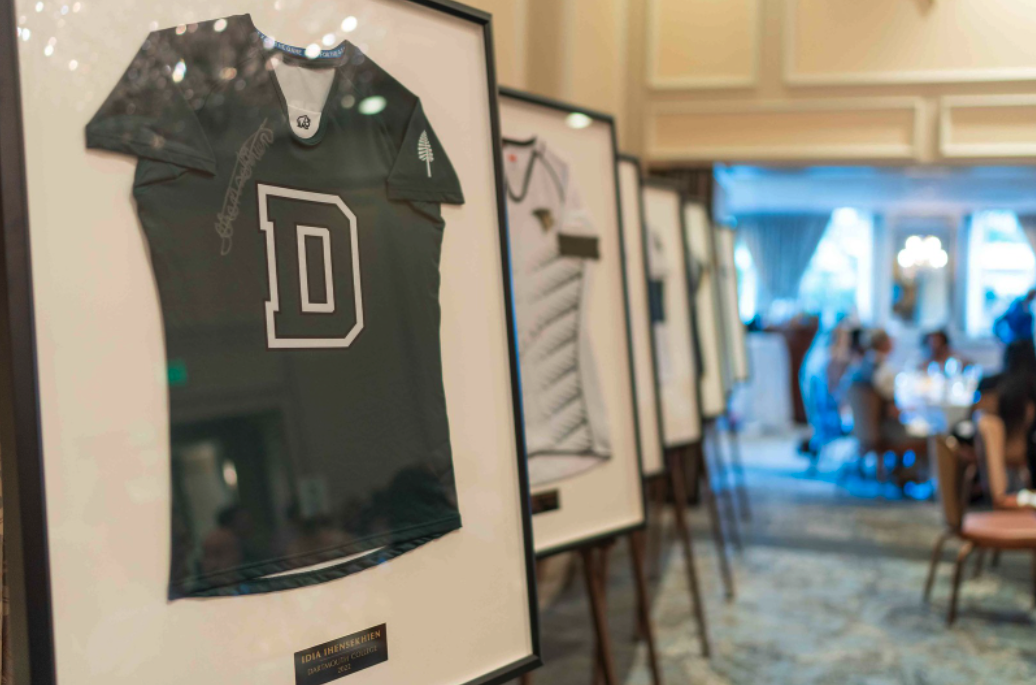 Each winner has provided a signed team jersey. Here are the jerseys on display. Photo John Bang for WAC.