Some Surprises at NCR D1AA Quarterfinals

Some Surprises at NCR D1AA Quarterfinals 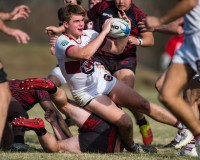 And we're down to four teams in NCR's D1AA championship after this weekend's quarterfinals.

In most cases the higher-seeded or higher-ranked team won, but not always.

What the season did do was toughen up an already tough Virginia Tech side. They surprised Tennessee by playing tough early, but the Vols responded and led by as much as 22-5. But the Hokies kept plugging away, undeterred by a deficit, and won to move on.

"Playing tough defenses allowed the game to slow for us," said club president Fernando Anduaga Jr. "Playing with teams that could play a full 80 at full pace helped us play until the final whistle Playing these hard teams improved our field awareness, knowing what to do in each zone of the field, helped with our physicality, helped us realize our weaknesses because they’d exploit anything we left open. And it helped us gain confidence playing against higher competition, because we knew we could come back if we stopped shooting ourselves in the foot and played our game."

Frank McGuire, Tyler Paul, Jack Murphy helped lead defensive effort in second half to slow Tennessee down and Luke Crytzer was outstanding on defense coming off the bench, intercepting a ball that could have been a game-winning try. Captain Hunter Danesi led the team with three tries while Paul Cardoni scored the try that sparked the comeback. Meanwhile Caspian Bailey's first try of the season put the game away.

St. Joseph's took the lead from a try after a period on the attack. UMass were penalized about ten meters from their tryline. With the wind making lineouts a dodgy prospect at best, the Hawks opted to tap and Hohman carried two Minutemen with him over the line in the corner.

DeRosa added a penalty later on and UMass did also, so it was a one-score game going into the final 10 minutes. But the Hawks were then able to get some continuity and ran about 10 phases into the UMass half. At the point Stine saw some space on the weakside around a ruck, too off, beat the fullback, and race over. DeRosa converted and that iced the game.

After being stymied by Boston College in the Liberty final, Binghamton unleashed an impressive offensive showing.

Dan Ahern continued his scoring touch for Binghamton, touching down three times, while Will Otondi scored two. Mike Davitt added the extras on seven of the eight Binghamton tries for a 54-21 victory. Ahern was moved from lock to flanker and that freed him up a little bit to stretch his legs, which he did and he was repeatedly blasting through tackles.

At No. 8 Otondi was also hugely influential while prop Alex Eforo was a force and also scored a try.

"We were able to get good ball to the second pod of forwards and challenge their backline," said Binghamton Coach Brian Grills.

The Louisville Cardinals beat the South Carolina Gamecocks 27-5 as Louisville showed once again how strong their defense is.

"We knew coming in we needed young guys to step up," said Louisville Coach Kyle Freeman. The Cardinals were without at least four players who suited up for the MAC championship weekend last week, so it was most certainly "next man up" time.

"They helped massively," said Freeman of the youngsters. "But the forwards especially made strides in set pieces, scrums looked strong and we were able to dominate there the entire match. Defensive pressure is what we have focused on all season and it is what pushed us through the Quarterfinals."

Freeman praise South Carolina for their speed and skill and how hard they played throughout the game. But Louisville's depth showed.

"Sticking to our structure offensively has been what has gotten us high scoring games all the way through the season," said Freeman, "and with that it gives the players all across the field scoring opportunities. Our biggest strength on attack is that every Cardinal is a carrier, try scorer, and threat with ball in hand."

So Saturday in Reading, PA, the NCR D1AA semifinals will be held with Binghamton taking on Louisville and Virginia Tech facing St. Joseph's.