Some Player Changes As USA Men Look To Dubai

Some Player Changes As USA Men Look To Dubai 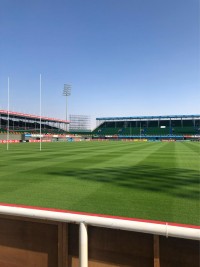 Friday has shifted something around, but he runs out a core of players who have been key to the USA's success in the last few years. Perry Baker (two-time World 7s Player of the Year), Carlin Isles (last year's top try-scorer), captain Madison Hughes, World 7s Player of the Year nominees Stephen Tomasin and Folau Niua, and the redoubtable Danny Barrett are all in the lineup.

But the team will be without Ben Pinkelman and Martin Iosefo, who played for the USA in the Rugby World Cup. They need a rest. Also not with the team is Folau Niua, who is still recovering from an injury.

So their absence allows Friday to check out someone else. Key among those might be Maka Unufe. The sleek-running center is back after serving a 14-month suspension for using a banned substance that he did not know was an ingredient in a supplement he was using.

The 2018-19 Rudy Scholz Award-Winner is an aggressive and very versatile player who could b a unique addition to the team.

“Preseason as always is a healthy balance between trying to evolve and get better on and off the pitch and ensuring we are ready to cope with the long season ahead," said Friday. “As a group we are comfortable with where we are at for this part of the season and we aim to continue building our depth as the season progresses to allow ourselves the best opportunity to compete in the World Series and Tokyo 2020."

"We realize we are far from the finished article and know we have much more work to do to ensure we are able to compete in what will be an even more competitive season for all," added Friday. "We will once again have to fight and earn every point this season in a Series where any team is capable of winning in any given day.”

FULL SQUAD (including college or HS team where relevant)

The tournament is being shown through NBC Sports Gold’s Rugby Pass.