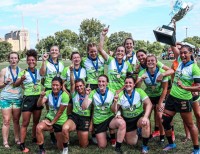 Scion made it two years in a row, and NAV 7s made it to the top for the first time as the USA Rugby Club 7s Championships wrapped up in St. Louis over the weekend.

Scion won the women's event for the second straight year, riding a very polished approach backed up by physical strength in the tackle and smart support work.

Backed by a huge performance from USA star Abby Gustaitis, Scion thundered through their pool games, winning all by shutouts and by large margins. Jade McGrath, Jessica Lu, and Monique Coffey all got in on the act as Scion created and then punished severely opposition errors.

Meanwhile, the San Diego Surfers were almost as dominant, winning their pool games 31-0, 29-0, and 26-5 to win their pool. Chicago North Shore also went 3-0, but had to scrape and battle in close quarters for their wins, which were all decided by a try or less. Cruising into the quarters, too, was Washington Athletic Club, winning big in their first two games before having to work a bit harder against Rocky Mountain 26-12.

Washington Athletic Club's combination of Nikki Kenyon, Erica Legaspi, the redoubtable Megan Saunders was clicking nicely, and they dispatched North Shore in the semi. Their overall speed and quickness to take their shape when they got a turnover was just too much for the Chicago side.

Scion finally gave up points, and were probably grateful for the challenge. But again, with an ability to power through the middle or slice around the edges, they beat San Diego 28-12.

In the final Lu opened the scoring with a quick tap and a superb dummy to put Scion ahead. Legaspi answered with one of the tries of the tournament, beating four players with her elusiveness, awareness, and speed. But as the game wore it it became more and more Scion's. Gustaitis made a run down the sideline and forced two players to tackle her. That's all Scion needed as the ball was made available and through the hole left by the additional tackler for the try.

Scion's defense was superb, and as they held our the WAC, they also turned opportunities into tries and Coffey helped put the score out of reach. Scion won in impressive fashion 29-7, outscoring their six opponents 266-19. Coffey, who was hugely responsible for that 266 number, was named tournament MVP.

NAV's summer residency paid dividends with a snappy combination of experienced players and young talent. The Life University twin brothers Darius and Donovan Law, who paced their college to a R7CC championship in May, did the same with NAV, showing that they had the speed, fitness, and physicality to perform at the senior level.

Few teams had an answer for NAV's teamwork, which was exceptional, and much of that fell at the feet of Corey Jones. The former Arkansas standout, Jones was the glue that kept all the pieces together, using his experience and ability to play almost anywhere to keep the machine ticking along.

Still NAV was almost tripped up bby a very good Denver side, getting out of pool play 2-0-1, with the Denver game ending in a 14-14 tie. It was that sort of day. A well-regarded Chicago Lions side lost their opener to Atlanta before righting the ship with wins of Beltway and Dallas. For Atlanta, that 17-14 opening win was kind of their high-water mark until the Shield final.

Old Blue, not unlike NAV in how the mixed experience and youth, also lost their opener before finishing pool play 2-1. The team that beat them, Schuylkill River, played some really impressive team 7s.

In the quarters, Denver just barely edged Life West in a weird one 7-5. Schuylkill's ball movement was better than Beltway's, NAV was too much for Belmont Shore 19-5, and Old Blue powered past Chicago.

That loss to Old Blue seemed to light a fire in the Lions, who shut out Life West and then used intense defensive pressure to force turnovers that Will Chevalier and Mike Ziegler punished for Chicago to take the Plate.

Meanwhile, Denver were stifled by the Old Blue defense, and NAV held off Schuylkill for make the final.

So the final would well be characterized as strong defense (Old Blue) versus attacking flair (NAV)—perhaps a simplification, but regardless it was NAV that took control. A penalty and quick ball out to Darius Law started the scoring. Then Jones orchestrated a more patient attack that set up the second try and it was 1-0 NAV.

Old Blue clamped down on the game after that and it wasn't until well into the second half that the scoreboard changed. Some good, patient work from NAV set up a scything run from Darius Law, and then there to back him up was Simione Moala, who was in for the 17-0 lead.

Was that enough? It was. Once again, a team that had been able to beak games open decided to be patient and smart, and NAV ran out the clock, not letting Old Blue any real scoring chances, to win it 17-0.

Jones was named player of the tournament and well he might be—everything good from NAV went through him.

Player of the Tournament Corey Jones gives props to his team after the championship victory  pic.twitter.com/P47NChWDZM