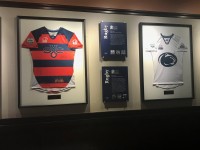 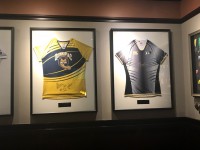 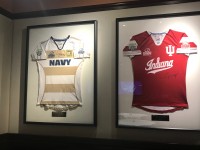 Game jerseys from each of the six current Washington Athletic Club award-winners are now officially on display at the WAC's Hagerty's Bar in Seattle.

The Washington Athletic Club hands out the Rudy Scholz Award for the top men's college player in the country, and the MA Sorensen Award for the top women's college player in the country. The awards are selected using a panel of experts, but with input from the public and from college teams around the nation. The Washington Athletic Club of Seattle sponsors the award, and hands out the trophies at a gala event every June. The first award was given in 2016, and this has become what college rugby has sorely needed for quite some time - a gender-equitable celebration of the best players in the nation.

Of the six award-winners, only the latest two have not represented the USA at the senior level. One, Lindenwood's McKenzie Hawkins, will likely do so very soon. The other, Navy's Connor McNerney, will go on to represent the USA in a different way, as a Naval Officer.

Above is a picture of the jerseys now on display, and you can also click on the photos at left.