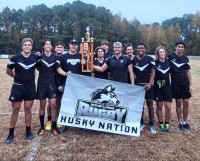 Administrative support from the NCYRU board of directors resulted in two competitions over the fall season leading up to the finals weekend.  NE Park in Gibsonville, NC served as the venue for the initial two events, including one re-scheduled date due to the weather impact of Hurricane Ian.

The championship finals took place at the rugby-specific venue at Raleigh Rugby Club in front of a crowd of enthusiastic supporters.

These competitions featured a total of 12 girls high school 7s sides hailing from various cities across North Carolina plus a few from South Carolina and Georgia interested in gaining competition opportunities.

The boys high school competition included  seven Tier I, and eleven Tier II boys programs traveling from all corners of the state. Match official support was provided by the SERRS referee society, and volunteer support from several club rugby teams made the fall season a reality at each location.  College and academy scouts from NCAA and MLR programs were present to view the competition, and film of several matches was captured and posted online to allow for scouting and team development.

“Our focus for this fall competition has been all about the fun, intense competition, and camaraderie rugby brings out, and we certainly appreciate all the efforts from all of the match officials, medical staff, and volunteers who helped make this season possible," said Dave Gozlan, President of NCYRU. "We especially appreciate the efforts by the athletes, coaches, and friends and family who always remind us that rugby is the ultimate sport experience because of the excellent people involved in the game.”

The Boys Tier I and the Girls High School finals were seeded based on previous competition results, and the Tier II Boys finals was a round-robin format.

Hough High School won the Tier I bracket, and the Raleigh Redhawks took home the top spot in the Girls competition.

Hough's top boys team went undefeated over nine games, winning in convincing fashion over the Charlotte Tigers in the final.

Captain Zach Colson and vice captain Porter Keubler led the Hough effort while Beyond Bembry was a try-finishing sensation.

The entire team, said Head Coach Bruce Colson, was "a perfect balance of quality 7s players that left no weaknesses in the squad.

The goal of the fall 7s series was to create opportunities for clubs to compete, and experience growth and emerge from the COVID-19 time period.  The strong participation from several teams who have historically competed in NCYRU fall competition, as well as several reboots post-COVID is a welcome sign that youth and high school rugby is trending in a positive direction.

For more about North Carolina Youth Rugby go to www.ncyru.com.