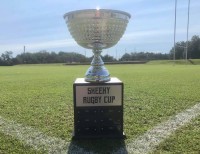 Penn State eked out a 28-26 victory over Mary Washington in a preseason game for both teams.

This was the inaugural Sheehy Cup created as a challenge match between the two programs.

The teams battled back and forth throughout the game but any thoughts of a comeback for UMW were stymied somewhat by two yellow cards in the final ten minutes. Down to 13 players the Mothers had a tough time getting into scoring position. Still, they did have a long-range penalty attempt as time expired, but it drifted wide and Penn State held on 28-26.

"UMW were very good on the day," said Penn State Head Coach Justin Hundley. "We made some crucial errors that we will clean up over the next two weeks before we take on Kutztown in our Rugby East opener. It was a great opportunity to play for the inaugural Sheehy Cup and bring it home to Happy Valley. Getting some younger guys some game time in college rugby so that they get a feel for the speed and physicality, I think will pay off well later this year."

Front-rower John O’Toole scored three tries for Penn State and was effective in loose player as well as in the scrum. He was named Penn State's player of the game. For Mary' Washington fullback Bill Tamani scored a nicely-taken try and made several crowd-pleasing tackles, while prop James Hughes was UMW's player of the game.

It was a good showing for both teams, as PSU and UMW have some impressive young talent coming through.

Of his mix of experience and 19 first-year players, Hundley said: "I am excited to see how they do in the tough Rugby East schedule."