From NY Triumph To Barbados To LAI Goes Atlantis

From NY Triumph To Barbados To LAI Goes Atlantis 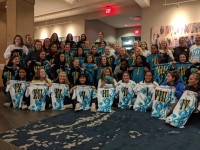 It’s a busy time for the Atlantis select side program.

After fielding four women and girls teams at the New York 7s, all of which made their respective finals, Atlantis will send a men’s team and a women’s team to the Barbados 7s this weekend, and has also signed up to be in the LA Invitational as part of the LA 7s international weekend February 29-Mach 1.

“We are teaching the players to be rugby players, not specific positions,” said Biddy Boyle, who works closely with American 7s guru Emil Signes, who started the Atlantis program in 1986. “We teach them  not to be a forward, not to be a back, but how to play—offloads, switches, tackles, footwork, decision-making.”

In New York, Atlantis women were brilliant in winning the Elite Women bracket and the Girls U16s. Their college women team was just barely edged by Upright Rugby, and the Elite girls also took 2nd.

Signes was quoted by Boyle saying that the women’s final “was one of the best women’s games I have ever seen. The level of play on defense and attack was phenomenal.”

This coming weekend Atlantis fields a Men’s team and a Women’s team at the Barbados 7s. The Women’s bracket is a money bracket and features several top-level select teams from the USA (ARPTC, Northeast Academy, Roots, Scion), as well as Canada (Equipe Quebec), and England. The Trinidad & Tobago police team will likely be very close to the country’s national team.

The Men’s bracket is a little smaller but includes Roots, Barbados, and the Trinidad & Tobago Defense Force team.

We haven’t seen the Atlantis men in action as much of late, but it’s worth noting that Atlantis alumni are a huge part of the major club successes in 7s. The Schuylkill River team that did so well at national playoffs had nine Atlantis alumni out of 13 players. The men will follow up Barbados with a showing at the Freetail 7s New Years Eve in the Austin, Texas area. There Atlantis could well be favorites.

Atlantis is also one of the earliest high-profile programs to sig up for the LA Invitational. The LAI is the invitational event around the LA 7s World Series event, and will be held February 28-29. The February 28 action will be in Irvine at Orange County great Park.

On February 29, the same day as the beginning of the World Series event, both the LAI and LA 7s games will be at the Dignity Health Sports Park complex. Teams will be able to play, drop their bags at designated team bag-drop points, and go into the stadium to see the international action.

Atlantis will enter a girls HS Elite team. While the team at the New York 7s was East Coast-heavy to make travel easier for the players, the LAI team will likely have more of a Western feel.

Josie Ziluca will return as head coach. She will be in Barbados this weekend, but coaching ARPTC.

Regardless, expect Atlantis to bring a high standard once again.