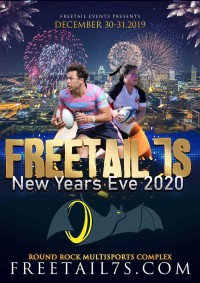 Watch for a new and intriguing sevens tournament coming in December, as the Freetail 7s is slated to kick off December 30 in Austin, Texas.

The games will be held on the last two days of the year, and is a high-level invitational for both men and women. Played at the Round Rock Multipurpose Complex (see what that's like here>>), the event features $4,000 in prize money for each bracket—$4,000 for the men and $4,000 for the women.

A post-tournament New Year's Eve social is also planned. The tournament will be shown live by Next Level Rugby.

There is still some room for teams to enter, but this is already looking to be a high-level competition. Among the teams expected to play are: Gorilla Rugby selects, Sacramento Eagles, Roots Rugby men and women, Celtic Barbarians, and Oregon Sports Union (ORSU).

Also competing will be the Central Queensland Dingoes out of Australia, the Raga Muffins, Phoenix women (Florida), Lomaiviti (California), and the storied Atantis program.

This is a new event that has already attracted some very impressive teams to compete. For more, go to: https://freetailevents.com/freetail7s/