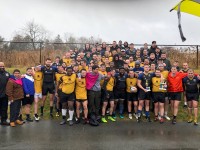 Here's a look at who has qualified for the NSCRO Championship weekend in the spring, after a series of playoff weekends the past three weeks.

The Championship weekend is scheduled for April 24 to 26, 2020 at a venue to be announced and consists of the Final Four teams in both the NSCRO Champions Cup and Challenge Cup playoffs.

Salve Regina came back from a 12-0 deficit to beat Holy Cross 15-12 in overtime to win the Northeast Regional playoffs for the National Small College Rugby Organization.

Seniors Ben Aubuchon and Kyle O'Connor scored tries to spark the comeback and Alexander Fingado converted one to tie the game 12-12 at full time.

In OT, Fingado slotted the game-winning penalty goal, and earned the game MVP honors in the process. Salve Regina is now 10-0.

In the semifinals, Salve held off a stubborn Colby College side 22-16, while Holy Cross came back from a 7-0 deficit to defeat Ithaca College 22 to 7.

Also in the Northeast Challenge Cup, Wentworth Institute of Technology edged the University of New Haven 17-10 in the final. New Haven jumped to an early lead after Kevin John slotted a penalty goal. Wentworth answered with three tries and took a 17-3 lead.

The second half was a massive battle, and while New Haven held WIT scoreless, and scored a try, it wasn't enough for New Haven. The Wentworth defense held strong and stymied several New Haven scoring chances.

WIT fullback Mike Marcolini played a strong effort all 80 minutes and was the game MVP, while Derek Parato also had a good game for Wentworth, and New Haven's Carter Smith played with a ton of heart.

In the semifinals, WIT pulled away from SUNY Geneseo for a 36-14 win, while New Haven held on to beat SUNY Maritime 27 to 17.

In the Champions Cup playoffs, Spring Hill College defeated Eckerd College 27-15 to win the South Cup qualifying tournament. Spring Hill beat Tennessee Tech 48-19 in the semis while Eckerd defeated Valdosta State 49-5. It was a big win for a Spring Hill team that had been varsity, but lost its funding and managed to not only keep it going, but got better.

Wisconsin-Stevens Point was dominant in the Challenge Cup playoffs, defeating California University of PA in the semis 57-15 and then rolling past Wayne State College 73-15 in the final. Wayne State dominated Lee University 54-26 in the other semifinal.

So far 5 teams are looking forward to the championship weekend April 24-26 in both the Champions and Challenge Cup competitions.