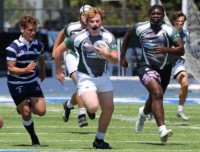 DLS was able to get some time for a few players after some injuries popped up. It was a tough start with some of the new combinations, with eight knock-ons in the first 15 minutes. That might have been due to overeagerness; it certainly looked like that problem on defense as DLS kept getting pinged for offside. Bellarmine made them pay with some effective kicking, and a long counterattacking run put Bellarmine up early 10-7.

"I think that is what our boys needed," said Coach Derek Holmberg. "They were taking this opponent lightly and Bellarmine punched us in the mouth because of it."

After that De La Salle started being a little more careful with the ball and made smarter offloads. They ran in two tries to take a 21-10 at halftime and pulled away in the second half to win 64-17.

Senior Jon Puckett returned to the rugby team for the first time since 2019. He seemed to pick up where he left off, playing only 20 minutes and logging six tackles and a try. Mario Storti continued to lead well, while Brendan Regan and JJ Tofaeono were big for DLS once again. Jake Lucas had several line breaks while Grant Taft and Tyler Henry were named players of the game.

Meanwhile, an up-and-comer team in Northern California is Gridley. After beating a very good Elsie Allen squad last week, and in convincing fashion, Gridley followed that up with a 40-26 defeat fo Sac PAL. The Sacramento team had more size than Gridley, but Gridley's pace, fitness, and organized attack saw them through. Sac jumped out to a 12-0 lead but Gridley responded with three tries to lead 21-12 at the break. Sac PAL scored twice right after halftime to retake the lead 26-21, but Gridley once again responded.

Granite Bay continued its run of good results, and after two razor-thin victories they shut out Elk Grove 32-0. De La Salle and Granite Bay are now 3-0, while Gridley, which lost an early game to Mother Lode, is now 2-1.