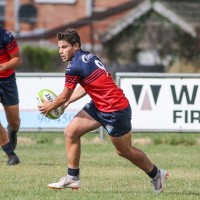 This Sunday the NIKE Rugby Camp Selects will play against EIRA Southern California in what promises to be an action packed affair. The match will take place at the University of San Diego as a curtain raiser to the San Diego Legion and NOLA Gold match.

EIRA Director of Rugby Salty Thompson stated, "EIRA Southern California appreciates the opportunity to play Nike. Both teams will feature many of the best young prospects in the region and it will be fun for the kids."

The match marks the second match of the NIKE Rugby Selects domestic schedule before they head to the Great Northwest Challenge Regional Cup Tournament in June and ultimately Australia for a ten day tour in July. In early May, NIKE was victorious against the Arizona Bobcats in Phoenix.

Following the mach vs. NIKE, EIRA SoCal will play in the Rocky Mountain Challenge Regional Cup tournament and EIRA will send several teams to Ireland and Canada over the summer for International tours.

‘Over the past decade we have worked with many exceptional young players. We wanted to give these players the opportunity to develop their talent in the US and test their skills abroad. A touring side is a natural progression for our camp model’, stated long time NIKE Rugby Camp Director Ethan Willis. ‘We are excited for these young men to get to play against consistently strong opposition like EIRA.’

The match will feature some of Southern California’s brightest young talent. EIRA’s half back duo of Sean Nolan, who is a regular with Munster Academy, and accomplished scrum half Tiann Mosconi will test NIKE with their tempo and accuracy. Nike will look for prop Isaac Tinoisamoa and center Andrew Dorvillier to keep the game tight with physical play.

The match will begin at Noon at Manchester Field at University of San Diego and is open to the public.

*The NIKE Rugby Camp Selects are sponsored by the San Diego Legion.