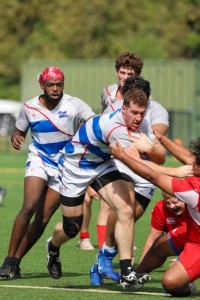 The the teams that usually do well in the New England Wide College Rugby Conference are all starting strong as Norwich, Coast Guard, UMass-Lowell, and Vermont all won to improve to 2-0.

Clayburgh converted five for a person haul of 20 points. The Cadets were in control from the jump, but over the next few weeks the Cadets will see their schedule toughen up with Vermont, Boston University, and Coast Guard on the slate.

Boston University, while 0-2, is no pushover. Their first loss was 15-11 to Coast Guard, and this past weekend they lost 22-19 to UMass Lowell. So two losses by a total of seven points isn't a sign that they are in trouble.

BU almost beat Lowell, anyway. Fullback Jon Brabo's last-second try put UMass-Lowell over the top. Despite carrying an injury, Brabo toughed it out for the entire game and logged two tries in the contest. Tested for depth, Lowell used no subs in this game. BU battled well at the breakdown and caused repeated turnovers and penalties, and the game, said Lowell Head Coach Steve Diamantopoulos, "shows us where some of our weaknesses are—we get back to work on Monday getting better at our craft."

Coast Guard built on that close win over BU with a 35-21 defeat of Sacred Heart. Vermont went to 2-0 with a 29-19 defeat of Bentley. New Hampshire beat Quinnipiac and are now at 1-1.