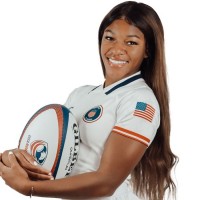 Maybe not so much a rookie, Ariana Ramsey is still listed as uncapped for the USA Women’s 7s team; uncapped, but an Olympian.

Ramsey hasn’t played in the Sevens World Series yet, but did enough to garner a place on the Eagles squad for Tokyo. She says it’s because she knew where she was deficient, and fixed it.

Once she was able to show she was a good defender, Ramsey’s pace came into play. The speedy outside finisher is an offensive weapon, for sure, and he speed also allows her to track down opposing runners on a breakaway—and now she can tackle them, too.

“I know my speed made me valuable but I had to be a good defender.”

A Nod to Atlantis

Ramsey’s journey to the Olympics is heavily influenced by her select side play with Atlantis. With the NAI 7s coming up this week it’s worth pointing out that it was in Salt Lake City, and later in the New York 7s, that Ramsey got her first taste of high-level rugby, and coaches got their first real look at what she can do.

“Playing with Atlantis was awesome,” she said. “It got me seen. I remember a lot of coaches came up to me and that’s where [Dartmouth Head Coach] Katie Dowty saw me. It was a big jump but I learned a lot.”

That jump, from high school to select side, and the jump to college, are tough to handle. But the jump to the national team is another thing altogether.

“It can be very shocking,” Ramsey told Goff Rugby Report. “From high school to select side and then select side to college and then higher level camps and all of those transitions are difficult. But here [with the Olympic team] the intensity is really high and the rugby knowledge you need to have is very different. You need to know your numbers. How many are in the ruck, and what does that mean for the people on the outside? Everything about it puts you on another level.”

And outgoing, social person, Ramsey has had to adjust to training and, soon, playing with no fans. Those connections are important. We asked her how she handles it when she makes a mistake and she said she usually looks for a high five from a teammate or a quick word—a connection to reset her mind.

Even so, training in Japan has had its moments.

Mimaska has been so welcoming to us,” Ramsey said. “The training facility for us have been amazing. They even had kids from the local school come out to watch us practice and that was really fun, especially since we won’t have fans in the Olympics. This is our last day here and we will miss it.”

But there’s work to do.

“We’re going for gold,” said Ramsey. “That’s what we’re shooting for. But we don’t want to put so much pressure on ourselves that we overdo anything. We know every team will make a mistake. We just have to focus on the next thing.”