The NCR D1 playoff bracket is set; here's how it looks.

(Note that the numbers in tbe bracket graphic are NCR's rankings of their D1 teams.)

St. Bonaventure takes on Mary Washington. Bonnies has had one of its best seasons, finishing 3rd in the Rugby East with a 3-2 record, and recording first-ever wins over Penn State and Kutztown. (Rugby East is also a D1A Conference and the top two teams there, Army and Navy, are not in the NCR playoff sphere.)

"Having the guys respond the way they have, especially coming out of the pandemic [shutdown] has been really gratifying for the our staff," said Head Coach Tui Osborne. "We have a good mix of seniors and young players and they have come together well."

Against Kutztown, which was a little over a week ago and was a tense 17-12 decision, Bonnies players had to dig deep.

"They really had to work hard," said Osborne. "We had to cut out the kicking because they defend that too well and the bows just stepped it up, played some good phases, and defended really well. Our penalty count is still not good, buy we're improving every week."

Mary Washington was ranked #1 among DIAA teams by GRR for a while and really their only blemish is their loss to Queens University in the Chesapeake Conference decider. UMW is young, and in fact their top try scorers—Lewis Naylor, Sebastian Schefermann, Connor Foster, Viliame Tamani, and Toby Barnfield-Lee—are all freshmen. They are also all from overseas, an indication of the success of Mary Washington's recruiting efforts. This will be a massive clash.

Iona takes on Kutztown. Iona won the Liberty Conference and the only bad day they had was a 55-14 loss to Indiana on October 16. The Gaels didn't lose a game in conference play and with Cam DiGiorgio, Brendan Buckley, and Nick D'Allara all playing well they have ramped up their defense since that game. Kutztown, at 1-4 in the Rugby East, might look vulnerable, but their losses to Penn State and St. Bonaventure were by razor-thin margins and they can easily surprise someone.

Brown, which shocked everyone but themselves in beating Dartmouth for the Ivy League championship, takes on a Penn State team that has been in a series of really close games. They beat Mary Washington by two and Kutztown by three, and lost to St. Bonaventure by four and Ohio State by three. They competed well against Army and Navy and could easily go through this bracket.

Finally there is Northeastern vs Queens. Queens beat Mary Washington and Mount St. Mary's to win the Chesapeake and go unbeaten. Hilton Olivier led the Chesapeake by a wide margin in points scored. His six tries, three penalty goals, and 36 conversions accounted for 111 points. the next highest total was 68. Campbell van Rooyen, Alston Burton, and tireless flanker Benji Hund are also among the scoring leaders for Queens. Their only loss was a non-conference game with Navy which the Midshipmen won 34-21.

Northeastern blew away almost every opponent with a potent attack led by wing Ryan Connelly, and a tough defense led by No. 8 Alex Parciak and center Alvaro Borrego that was likely best on display in their 19-10 Liberty Final loss to Iona. 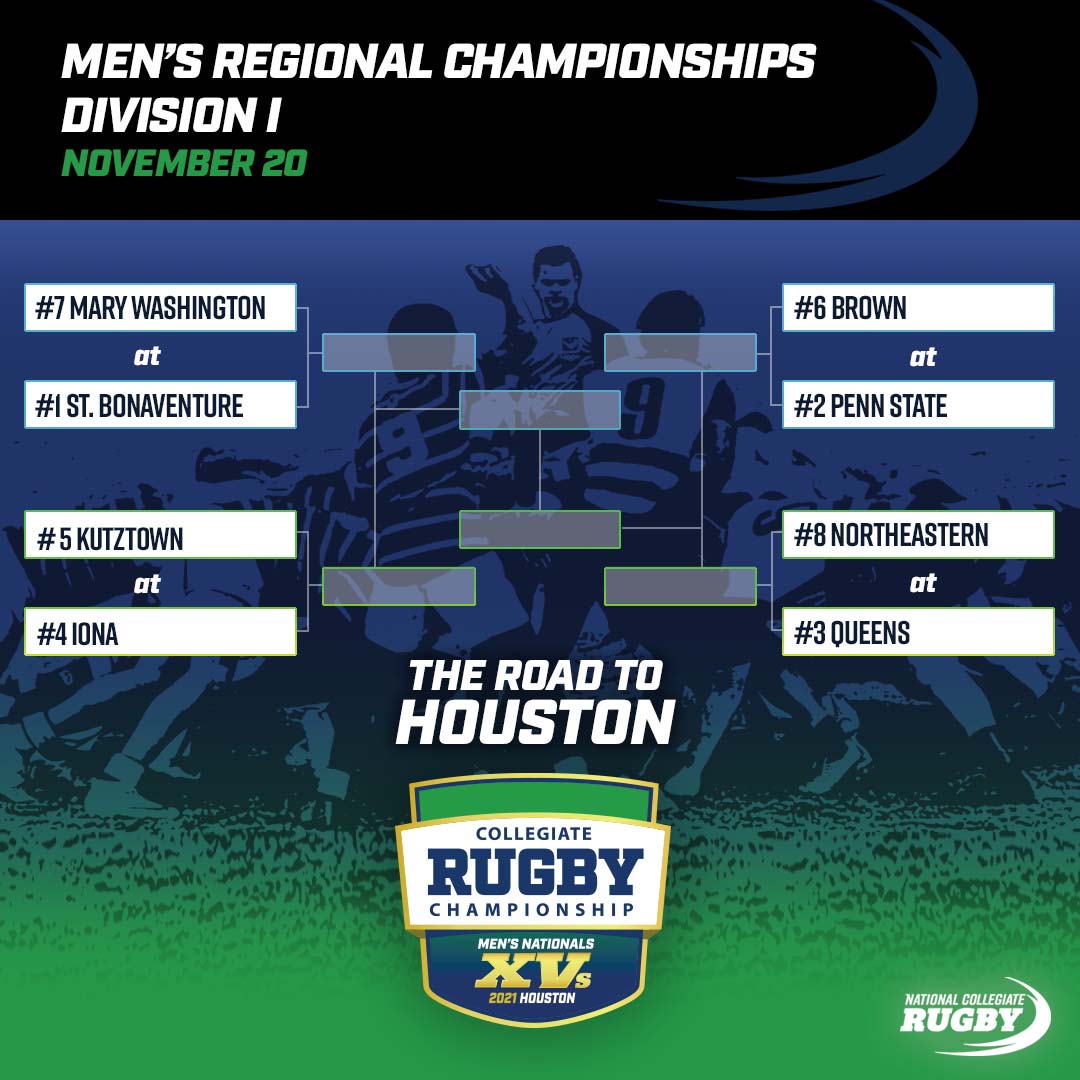