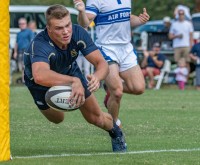 The US Naval Academy kicked off the Commander-in-Chief series with a dominating 81-5 defeat of Air Force at the Prusmack Rugby Complex in Annapolis Saturday.

Lt. Col. Kevin Shea was an Air Force Academy graduate who cross-commissioned in the US Marine Corps, and was killed on his birthday during his second deployment to Iraq. He played rugby for Air Force and coached rugby at Navy. Ami Shea, who was his wife when Lt. Col. Shea was killed (they have two children), was at the game to present the trophy. The night before, the fourth annual Navy Rugby Alumni Association dinner on Friday night saw 270 Navy Rugby alumni and guests along with the Superintendent of the Naval Academy, Vice Admiral Sean Buck, and Naval Academy Athletic Director Chet Gladchuk celebrate Navy Rugby.

Navy came out fast looking to play an expansive game. The first try came in the 4th minute by Navy from a 5m scrum in Air Force's 22 with center Joey Hobbs punching it in. Navy flyhalf Matt Mischler converted the try to make it 7-0.

Air Force put up a fight after Navy's first score by holding them out for the next 10 minutes. Navy ended up breaking that standstill when wing Mykol Brooks carried it in untouched for a Navy try. Navy continued in a dominant fashion throughout the first half, scoring six more unanswered tries by Brooks, Bleakley, Tounkara, Hobbs, and Strehle. Five of those tries were converted, setting up a 52-0 lead.

The second half started with Air Force's flyhalf and captain, Koby Hinnant scoring a solo try from a line break two minutes in. That would be Air Force's only points.

Navy retaliated with explosive back play that led to Jermaine Oliver's try from fifteen meters out in the 46th minute. The try was converted making it 59-5.

Navy continued to put the pressure on with fresh subs in the second half. This pressure resulted in four more tries by the midshipmen by Oliver, Malick, Hobbs, and Fuller. Only one of the four tries was converted, resulting in a 81-5 final score.

Both teams showed plenty of determination in the annual rivalry game. Both teams honored the memory of Kevin Shea.

“It was pleasing to execute in a number of areas we have been working on this fall," said Navy Director of Rugby, Gavin Hickie. "Our discipline and our set-piece were very good, and this gave us the platform we needed to attack. A big thank-you to [Air Force] Coach Denny Merideth and his Air Force team for another hard-fought Lt. Col Shea match, and of course to Ami Shea who presented Navy captain, Gordon Livermore with the Lt. Col Shea Cup.”

Navy also hosted Maryland's first and second XV earlier in the day with Navy's second and third XV. Navy pulled away in both games winning 21-18 and 74-5 respectively.

Against Air Force, Navy had 57% of the possession and 78% of the territory. The key was that Navy made the gainline 80% of their carries, and Air Force missed 53 tackles. Navy also had more space and time, thanks in part to being able to win ball quickly out of the breakdown—twice as often as Air Force could accomplish that.