Minnesota-Duluth Lays Down An Early Marker

Minnesota-Duluth Lays Down An Early Marker 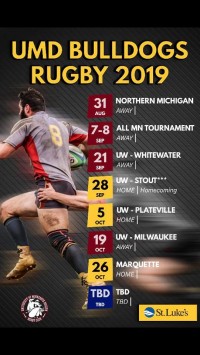 The University of Minnesota-Duluth opened up a new season in a new conference with a very impressive 65-19 defeat of Northern Michigan.

Duluth had switched from the Northern Lights conference, which includes teams from Minnesota and North Dakota, to play in the Great Midwest. The Great Midwest was probably the toughest conference in men’s DII college rugby before the Bulldogs joined, and now any argument is that much hard to pose.

“We have a very young team, especially in the tight five,” said Walsh. “We lost a lot of forwards and we’ve moved some guys up from the B side and change positions. I am still not sure what the scrum’s going to be like.”

But, overall, with No. 8 Erik Elsner leading from the front, Duluth played a very expansive game and ran NMU into the ground.

“It’ was very competitive for the first 20 minutes,” said Walsh of a game where the teams traded tries back and forth. “At halftime I told them, if we score next, we’ve got a good chance.”

They did, and rolled from there. Walsh said there’s stuff to work on, but the fitness was there.

“For a first-up game on a very hot day their fitness was pretty good,” he said. “We worked a pretty good pattern.”

Donald Martin had a big game. Expecting to start at flanker, he was drafted quickly into the front row for this game and performed admirably. It wasn’t anything new to Martin, who had played flanker, prop, and even flyhalf for his high school team, Northside (in Duluth).

“He’s got the skills but he also has, as we say in New Zealand, the mongrel in him,” said Walsh.

Next up for UMD? The All-Minnesota Tournament (which is one reason why they played NMU in Michigan this past weekend). Then comes a week off and a rough run with Wisconsin-Whitewater, Wisconsin-Stout, Wisconsin-Platteville, Wisconsin-Milwaukee, and Marquette.