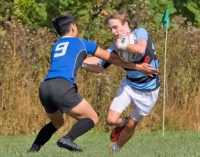 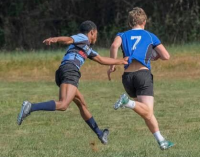 The first leg of Fall HS Sevens in the Mid-Atlantic Region was completed this past weekend at Gosling Park in Glenn Dale, Md.,  home of Wild Geese Old Boys Rugby club.

The event was hosted by the Mid-Atlantic Rugby Foundation and Hope for South Africa, a charity that works to prevent the effects of Fetal Alcohol Syndrome in that country.

Frederick Youth Rugby, Maryland Exiles Youth Rugby, Bethesda Roosters Youth Rugby, and Maryland Blue Crabs participated in the tournament.  All four teams played round robins against each other, and the players slowly learned the differences between fifteens and sevens rugby.

Beltway Elite Coach Roland Pratt was on hand to observe the games and assess the talent: "The skill level was definitely here today, and I was impressed with the desire of the boys to improve.  These boys just need to play more games, and the sky is really the limit for some of them."

Next up in the Mid-Atlantic Region is Valhalla Spookfest Sevens on October 27.

The tournament is set to have a Middle School Girls bracket with Fort Hunt, Valkyries, and North Bay. The HS Girls bracket features those three teams plus West Carroll. For the HS Boys, Frederick Falcons, Winchester, Maryland Exiles, and Bethesda Roosters will compete.

For those interested in the Mid-Atlantic Rugby Foundation: https://www.marfi.org/

For those interested in Hope in South Africa: https://www.hopeinsouthafrica.org/