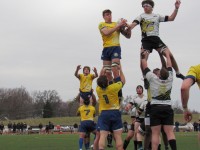 It was a good, generally well-played rugby game in which Lindenwood's time together and the fact that their 2nd side isn't that much different from their 1st side, saw the Lions win 46-3.

Early on, Lindenwood dominated possession, and while Marian defended doggedly, the Knights were under pressure from a big, powerful Lindenwood squad. Center Carson O'Donnell out of the Fox Valley Chiefs in Illinois punched through a couple of times and helped set up the first Lindenwood try. Although ... it took several bites at the apple for Lindenwood to get over.

Lindenwood came right back to score again, this time with a superbly-worked weakside move off a scrum at midfield. O'Donnell made the initial half-break, linked with flyhalf Coleson Warner, who then worked a little pass back-and-forth with No. 8 Stefan Terblanche before Micah Duffield took the last pass and was gone.

Marian was able to get some ball and challenge the Lindenwood defense, but they were a shade too high going into contact, allowing Lindenwood to hold them up or shove them back. But a late hit on a kick presented a very kickable penalty, only for the Knights to opt to tap it, and the Lions defense held.

Instead it was Lindenwood that opted for goal, with Warner slotting a well-taken long-range goal for a 15-0 Lindenwood lead.

Their tails up, the Lions worked a really nice backline move to score in the corner, with Warner adding the touchline conversion. Marian replied. Not backing down they hit the rucks a little harder, got a couple of penalties, and slotted the goal to make it 22-3. Lindenwood came right back to threaten the Marian line, and then O'Donnell took a flat pass and was through to make it 29-3 at halftime.

In the second half, Marian was close to scoring several times, and while they had chances to add to the score, opted instead to take the lineout or the tap to try to get the team's first try of the season. Had they succeeded, certainly that would have been a boost to their confidence, but the Lindenwood defense was just too hard-hitting.

The Lions, for their part, scored three more tries, although it was tough going as Marian kept on playing hard and Lindenwood kept giving up penalties.

For Marian, co-captain and flyhalf Isaiah Ariza-Escala did well in keeping the backline working hard throughout the game, especially on defense. Tighthead prop Jim Rotherham, who came over from the cycling team and hadn't played rugby in several years, was a powerful presence up front, and lock Jon Daniel Farrell, who played for Head Coach John Harley as a freshman in high school but then concentrated on his wrestling, looked like he'd never left rugby.

In the end, though, Lindenwood was just too used to playing with each other. Marian, fielding five players who had never played rugby before, and a few more who hadn't played in a few years, looked like a real rugby team, but a green one.