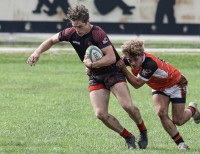 The clash of teams who are kicking themselves happens in the MAC as Western Michigan plays Louisville.

Both teams feel like they had hit upon the right way to beat league-leaders Bowling Green. Neither was able to sustain that though for 80 minutes.

Now with both teams sitting at 3-1, albeit with WMU ahead because of bonus points as they have a pretty good try-scoring strike rate, the Cardinals and the Broncos face off this weekend.

Louisville’s biggest issue seems to be finishing, as they had BGSU under pressure and got just the two tries. They gave up an interception try to Bowling Green, which can be especially galling because usually you give up an interception when there’s a real try-scoring chance for your team. A 14-point turnaround would have made for a different story last week.

Western Michigan, meanwhile, just didn’t quite piece it all together early enough against a very snappy BGSU that has a superb backline and hardworking forwards.

This week, Louisville will certainly expect to showcase their defensive prowess, while WMU will want to hid hard and fast and early.

There’s a nice undercard in the MAC this week, with Cincinnati vs IUPUI. Both have just the one loss in conference play, and is Louisville loses this weekend, the winner of the Bearcats and the Jaguars will jump into 3rd place.